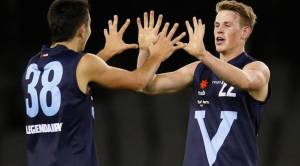 Vic Metro has farewelled the the 2015 NAB AFL U18 Championships on a positive note, with a last gasp win over South Australia.

With less than one minute on the clock, Northern Knight Tyrone Leonardis intercepted a clearing SA kick from defence.

Just seconds earlier Leonardis had been the player sending the ball deep into Metro’s forward 50 after receiving a sweeping handball from Alex Morgan (Oakleigh Chargers) who split the pack in the middle of Etihad Stadium to give Vic Metro a chance of victory.

With the most important kick of the game, Leonardis kicked long to the forward pocket from outside 50.

Callum Moore (Calder Cannon), who had provided a key marking target up forward and kicked a crucial final term goal for Vic Metro was unable to get his hands on the long ball. Lucky he didn’t.

As the ball cleared the pack, waiting in the goal square was Oakleigh Charger Ben Crocker, who trapped the ball, put it to his boot, and the rest is history – Vic Metro winning 10.6 66 to SA 8.13 61.

Crocker was the match winner, kicking Vic Metro's first goal 14 minutes into the second term, and it's last with 20 seconds left on the clock. He kicked three for the game, along with 16 disposals and three goals as Metro led for less than two minutes of the game.

A victory looked unlikely at quarter time after SA peppered the goals with 17 inside 50s to four, but only led by 23 points – kicking three goals from nine scoring shots.

It was the same margin at half time, before Vic Metro unleashed a nine goal to four second half.

Sandringham Dragon Harley Balic (22 dsiposals) was a standout in the second half revival, leading strongly from half forward and helping set up his forwards.

Trailing by 11 points at three quarter time, back to back goals by Hisham Kerbatieh (Calder Cannons) – his third - and Bryce Batty (Eastern Ranges) gave Metro the lead for the first time in the game, 16 minutes into the final term.

It was short lived as SA quickly transitioned the ball from the bounce to Maris Olekalns just over a minute later to regain the lead.

The ball returned to the middle with 90 seconds left on the clock, and it was enough time for Crocker to cap off a memorable come from behind win for Vic Metro.

Jade Gresham (Northern Knights) showed why he won the Metro MVP award for the Championships with another consistent performance, continually winning the ball out of the middle with 22 disposals , five marks.

Jack Silvagni highlighted his versatility as he ventured into defence in the second half, lending support  to the good work of his Oakleigh teammates Daniel Beddison, Morgan (17 disposals)and Jack Firns who constantly repelled attack after attack from SA.

Vic Metro finished the Championships with two wins – in Round 4 against WA and the final round win over SA.