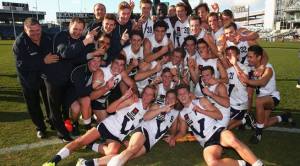 Vic Country has claimed a clean sweep of the NAB AFL U18 Championships, with one of the most dominant displays for a number of years.

After a kick after the siren win by five points against Vic Metro in Round 1, South Australia were the only other side to get close to the powerful Country unit, defeated by 11 points in Round 5 after a late flurry of goals in the final term.

But as they had all Championship, Country steadied as Ben Ainsworth kicked his fifth goal of the game to seal victory, with what would be the final major of the afternoon as the 2015 title holder won by 32 points.

The bottom age U18 player from Gippsland Power proved he will be a player to watch at the Championships next year, as Ainsworth marked strongly and often produced something out of nothing up forward.

Jarrod Berry completed a successful Vic Country campaign, backing up his U16 MVP honour last year by playing all six matches in 2015, and producing a 22 disposal game from half back in the final match.

Darcy Parish again provided poise through the midfield for Country, amassing 29 disposals to lead all stats winners on the day, while Gach Nyuon again shouldered the ruck work as he did all Championship, with 29 hitouts and another athletic display around the ground.

Josh Schache was named the Vic Country MVP and also won the Larke Medal for the best Division 1 player of the Championships. While Round 6 was his quietest game - still producing 14 disposals, four marks and a goal – he was a deserved winner of the competition Medal kicking 24 goals over six games and influencing each match throughout as a strong presence up forward for Country.