Vic Country dominates All Australian side 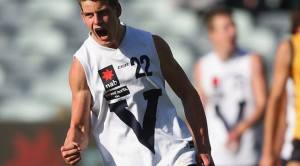 The Championship winning Vic Country side has dominated the NAB AFL U18 All Australian team.

Eight Country players were named in the team, the most of all sides in the 2015 Championships.

It was no surprise that Vic Country coach Pal Henriksen was named All Australian coach after leading his side to six straight wins and an undefeated record.

Vic Metro featured three players in the All Australian team, with MVP Jade Gresham, half forward Harley Balic and Nick O’Kearney receiving selection for their form throughout the Championships.

NSW/ACT captain, MVP and North Ballarat Rebel Jacob Hopper was also named in the side.

See the full team below.