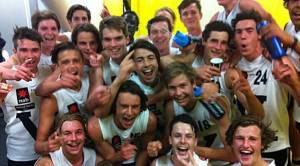 Vic Country has kept its undefeated run intact after defeating Vic Metro today by 19 points in Round 2 of the NAB AFL U16 Championships.

The win sets up a Championship showdown with South Australia on Friday for the title.

Scores were tied at half time after an even first half, but a Vic Country victory looked doubtful at final change after a scoreless third term by Country. Vic Metro led by 16 points at three quarter time, and it could have been greater after an inaccurate start to the term. Patrick Naish kicked his first midway through the qaurter, and Jack Higgins kicked his second to see Metro go two goals infront.

However the final term was all Country as they lifted their intensity and pressure on their opponents. As they did in the second term, Aidan Quigley and Brent Daniels opened the scoring for Country with each kicking their second goal of the game. With Country now within a kick, Tyrone Hayes slotted the first of two final term goals, to give Country the lead just seven minutes into the final quarter. They did not look back, kicking 5.5 in the final term to no score to remain undefeated in the 2015 U16 Championships.

In the other Division 1 game, SA stormed home in the second half against WA, restricting the westerners to just one behind in third and fourth quarters to record a 74-point win. T.Cox kicked six and Moller 4 for the winners, who will face Vic Country in the title decider this Friday at 10am. Vic Metro will play WA in the final round at midday.