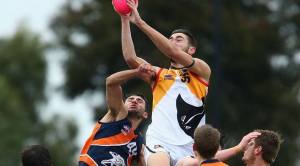 With six rounds remaining in the TAC Cup home-and-away season, it appears only one spot in the final eight is still up for grabs.

Two games and significant percentage separates the Gippsland Power (5-5-1) in seventh position and the Calder Cannons and Sandringham Dragons below them, who share records of 3-7-1 after Round 12.

A costly third quarter meant Calder missed a golden chance to record a vital win against the third-placed Dandenong Stingrays at RAMS Arena on Saturday.

After taking a six-point lead into the second half, the Cannons conceded six goals to one in the third term, enough to help the Stingrays eventually hold on by seven points.

The sixth-placed Falcons have now played out two draws in the last three rounds and hold a unique 6-3-2 record.

The 7-4 Ranges took a 35-point lead into the last change, having held the Power to just 1.6 in the first three quarters, but could only watch as Gippsland slammed on six goals to one in the final term to be within three points when the siren sounded.

In the weekend’s other results:

-      The North Ballarat Rebels maintained a two-game buffer on top of the ladder by defeating the Western Jets by 29 points at Eureka Stadium;

-      The second-placed Murray Bushrangers came from behind in the last quarter to knock off a spirited Northern Knights team by six points at Norm Minns Oval; and

-      The Oakleigh Chargers moved into the top four with a 95-point win over the Bendigo Pioneers at Queen Elizabeth Oval.