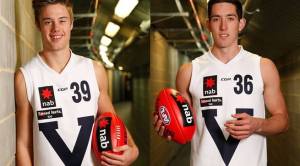 The two touted contenders for the no.1 pick at this year NAB AFL Draft will line up in the same forward 50 arc at Shepley Oval on Saturday.

The dream Dandenong Stingrays vs Murray Bushrangers TAC Cup Round 13 match will see two Vic Country teammates, named at opposite ends of the field in the U18 Championships All Australian team, become opponents this weekend.

17-year-old Weitering said he and long-time friend Collins would share the responsibility of keeping 199cm Schache – who booted 24 goals in six dominant games at the U18 Championships – under control.

“‘Collo’ and I will just sort things out – we’ll just communicate with each other,” Weitering said.

“We won’t stay on him as an individual for the whole day; we’ll definitely change and give each other chop-outs.”

Through their time spent in Vic Country representative squads since the U16 level, Weitering said Schache had become a great friend.

“He’s definitely a dominant player on-field... (But) he’s a quiet sort of guy.

“He’s a very likeable guy, easy to get along with and easy to communicate with once you get to know him.”

17-year-old Schache, Vic Country’s MVP and Larke Medallist as the best player of Division 1 at the U18 Championships, said his Vic Country captain Weitering was a true role model.

“On the field he leads by example and off the field too; he doesn’t do much wrong,” Schache said.

“I definitely look towards him if I need to do anything.”

The battle of the key-position players won’t be the only thing to watch at Shepley Oval on Saturday: Other stars of the successful Vic Country campaign such as Murray’s Jy Simpkin and Will Brodie, and Dandenong’s Thomas Glen, Mitchell Cox, Gach Nyuon, Kurt Mutimer and Brandon White will all take the field from 1.30pm at Shepley Oval.

This will be a heavyweight TAC Cup clash to remember.