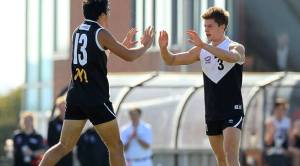 Captaincy is sitting rather well with Darcy Tucker at the moment.

The North Ballarat Rebels skipper returned from successful Vic Country duties last weekend to lead one of the most talented lists in the TAC Cup, a team currently sitting on top of the ladder after 13 rounds.

With so many of its players coming from so many different places – including interstate – North Ballarat might have been in danger of lacking the cohesiveness required to be a successful team.

But in a key event for the club’s barnstorming start to 2015, 18-year-old Tucker and the Rebels’ leadership group helped make sure everyone was on the same page at a pre-season camp.

“That weekend really helped the boys get together,” Tucker said.

“We all bonded very well and got to know each other a lot more, because in our region there are boys (living) two or three hours away who have never met half the team before.

“As top-age players, we all helped the bottom-agers and new people, and we bonded very quickly.”

Tucker said his approach to the captaincy was to “lead by example” through his actions on the field and his professionalism off it.

“I try to tick all the boxes,” Tucker said, in a sign he already has the footy leadership lingo down pat.

Tucker ticked plenty of boxes in his bottom-age 2014 season, earning All Australian selection after a stellar NAB AFL U18 Championships as a damaging half-back for Vic Country.

After overcoming an ankle injury that wiped out much of the second half of his 2014 season, Tucker has started the new year by moving into a role in North Ballarat’s midfield.

He often played as a midfielder in his junior days with the Horsham Saints, but Tucker said his form has been “up-and-down” as he adjusts to the role at TAC Cup level.

“I enjoy it, but I’ve still got a lot to learn,” Tucker said.

“I won’t be able to dominate straight away in the midfield but I’m willing to learn as much as I can and hopefully become a good player in there as well.

“I’ve got to add more strings to my bow.”

Tucker said right now he feels more comfortable running off half-back in the mould of Hawthorn’s Grant Birchall or North Melbourne’s Shaun Atley, AFL players whose ability to run-and-carry he looks up to.

But by adding versatility to his game, Tucker hopes he’ll be able to fit in wherever he’s required if he’s drafted by an AFL club at the end of the year.

For now, he’s happy leading his talented team by example, which extends to his participation in the VicHealth H30 Challenge.

Tucker is an ambassador for the campaign which encourages Victorians to replace every sugary drink they would normally have with water for 30 days.

While completing his H30 Challenge, Tucker drank water instead of his usual sports drinks, and shared his experience via his Twitter account.

He also encouraged his two teammates he lives with to switch sugary drinks to water during that time, to reduce excess kilojoule consumption and reduce the risk of tooth decay.

It’s another case of Darcy Tucker ticking the boxes.

Saturday's clash against Geelong Falcons was a big day for the Rebels as it was their inaugural Ronald McDonald House Charity Fundraising game.

All money raised will be donated to the Ronald McDonald House Charity to help and support sick children and their families across Victoria. The club raised $3,500.