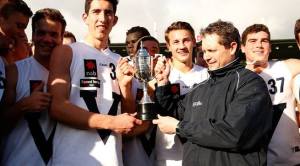 When a team is the sum of many talented parts spread across Victoria and separated for much of the football year, how do you bring them all together, build relationships and form those parts into a juggernaut?

Handling players hailing from Gippsland to Geelong, Dandenong up to the Murray and over to Ballarat and Bendigo, the challenge for coaches of Vic Country representative teams has always been the same.

It’s perhaps best illustrated by the fact that in the 20 editions of the NAB AFL U18 Championships before this year, Country claimed three titles compared to Vic Metro’s 11.

While the talent of different teams in different years plays a part in such results, there is nevertheless a hurdle for Country teams to overcome.

However, the coach of the Country side that recently marched undefeated through six matches at the 2015 Championships seems to have cracked the code.

“You have to be really efficient with your time,” Paul Henriksen said.

“When we come together, we need to use our time as efficiently as possible and that’s just the nature of the locations that we live in.

“Just coming in together for a few days in camps helps us... (It’s) that camaraderie you get from just being around one another; the players start to feel comfortable.”

A large core of this year’s Division 1 title-winning team has been gradually, sporadically building camaraderie with each other for several years now, dating back to when Vic Country took out the AFL U16 Championships in 2013.

Henriksen also coached that U16 team and has seen the core group of boys develop through two successful national carnivals.

“They walked in the front door as 15 and 16-year-olds and, for me personally, I’m (now) seeing them walk out the door and whatever comes our way, those relationships we’ve forged over the last three years have been really important,” he said.

“It’s something I’m really appreciative of – to have those relationships.”

Forging strong relationships in very short spaces of time is clearly a key to success for any Vic Country squad.

But, as Henriksen also acknowledges, sharing success together keeps the ball rolling – and the 2013 U16 Championships was where it all started for this group.

Henriksen said their previous shared success bonded them together, but the measure of this core group of players was the way they welcomed different teammates into the fold at the U18 level.

“They bring others in and say: ‘This is the way we’d like to play; please get involved. If you’ve got any more questions, you’re all part of us’.”

Josh Schache, Vic Country’s MVP and Larke Medallist as the best player in Division 1 of the 2015 Championships, also looks back to the U16 carnival as the root of this year’s success.

“We’ve been together a fair while,” the 199cm key forward said.

“‘Henri’ was our coach in U16s, so this year we already sort of had a feeling for being pretty successful because we had the same group of people together back then.

“The other boys who came in for the first time this year were able to build on that and really added something to the team.”

Some of those players are Schache’s fellow Murray Bushrangers, with underage players Jy Simpkin and Will Brodie having a big impact on Country’s fortunes, as well as 19-year-old David Mennen – Schache’s roommate when the team travelled interstate.

Others from elsewhere in the state have also formed bonds with the possible no.1 draft pick.

Schache said Sam Skinner from the Gippsland Power is “a really good bloke to be around”, as is Dandenong Stingray Gach Nyuon.

Meanwhile, another Dandenong player, Jacob Weitering – Vic Country’s captain and also a possible no.1 draft pick – has impacted Schache in a different way.

“On the field he leads by example and off the field too; he doesn’t do much wrong,” Schache said.

“I definitely look towards him if I need to do anything.”

Efficiently using the precious little time they have together to build such relationships has been the key to Vic Country’s all-conquering U18 Championships.

The team kick-started its campaign with Simpkin’s set-shot goal after the siren securing win no.1 against Vic Metro in thrilling circumstances, before accounting for Western Australia by 105 points in Round 2 and winning the rematch with Metro by 35 points in Round 3.

Victories against South Australia by 28 points and then 11 points, and finally a 32-point defeat of WA sealed the perfect Championships for Country.

Of the core group that has been together since the 2013 U16 Championships, Schache, Weitering, Nyuon, Dandenong’s Kieran Collins and Geelong Falcons Darcy Parish and Rhys Mathieson made the All Australian team, along with Gippsland’s Ben Ainsworth and North Ballarat Rebel Jarrod Berry – four more selections than any other team.

Clearly, Paul Henriksen and everyone at Vic Country were doing something right.