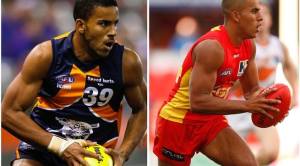 Former Calder Cannons captain Touk Miller has been named a NAB Rising Star nominee after a prolific game for the Gold Coast Suns in Round 16 of the AFL.

19-year-old Miller has been a bright spot throughout Gold Coast’s disappointing season to date, playing every game as a small forward/midfielder.

The Maribyrnong Park junior was the captain of Vic Metro at the 2014 U18 Championships before being selected with pick no.29 at the AFL Draft later that year.

Suns coach Rodney Eade said Miller has had a great year and his effort on the weekend was first class.

“Touk has been among our most consistent performers this season, and we’re thrilled to see his continued hard work and development has been recognised through his Rising Star nomination,” Eade said.

“He has brought a real thirst and hunger for the contested ball and in recent weeks has been given an opportunity to perform a key role through the midfield.

“We’re excited for Touk and his long-term future, and are all looking forward to his continued development and improvement.”

Touk Miller is the second Gold Coast Suns player to be nominated for the Rising Star in 2015 following another former Cannon, Adam Saad, in Round 5.