Hugh debuts and Rory too 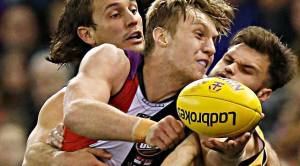 Former Geelong Falcon key-position player Hugh Goddard made his AFL debut for St Kilda in the club’s loss to Richmond at Etihad Stadium on Sunday.

The 18-year-old was selected with pick no.21 in the 2014 NAB AFL Draft and had 13 disposals at 92 per cent efficiency along with an impressive 11 one-percenters in his first match at senior level.

Former Calder Cannon Rory Atkins also made his AFL debut in one of the most memorable settings possible, for Adelaide in a showdown against cross-town rivals Port Adelaide.

The 21-year-old was taken at pick no.81 in the 2012 Draft and had six disposals in Adelaide’s thrilling three-point win after coming on the ground as the substitute in the second quarter.