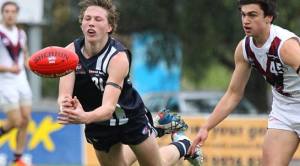 The Geelong Falcons had played 455 games in club history for only two drawn results before Round 10 of the 2015 TAC Cup season.

But in the last five rounds, Geelong has unbelievably added another three draws to that tally, tying with Tasmania in Round 10, the Sandringham Dragons in Round 12 and the Eastern Ranges on Saturday in Round 14.

In fact, the Falcons have almost added another couple of draws this year to their all-time tally of five, just getting over the line with a two-point win against the North Ballarat Rebels in Round 2 and a one-point triumph over the Gippsland Power in Round 4.

Incidentally, the weekend’s tie was the first in Eastern’s history, which stretches back to the TAC Cup’s inaugural year in 1992.

So, which team has been involved in the most draws since the competition’s inception?

Well, that dubious honour goes to the Calder Cannons and Northern Knights, which have both been involved in six draws.

Northern’s tally includes three draws with Sandringham, one of only two sets of clubs to have split the points on more than one occasion in the competition’s history, with the other set being Gippsland and the Oakleigh Chargers on two occasions.