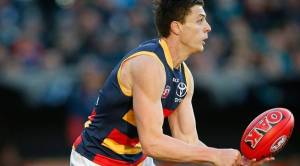 Former Vic Metro captain Jake Lever has been nominated for the NAB Rising Star award after a stellar performance in defence for Adelaide against the Gold Coast Suns at Adelaide Oval on Saturday.

The 19-year-old had 24 disposals at 92 per cent efficiency, took 10 marks and proved a constant thorn in Gold Coast’s side as it took the ball forward, recording seven rebound-50s in the Crows’ 45-point win.

An ex-Calder Cannon, Lever was selected with pick no.14 at the 2014 NAB AFL Draft and has played seven senior matches for Adelaide since making his debut in Round 6.

He is averaging 16.1 disposals and 6.3 marks per game at AFL level, and is ranked first among players eligible for the Rising Star in rebound-50s per game.

The Romsey junior captained Vic Metro in the 2013 NAB AFL U18 Championships before injuring his ACL the following pre-season and subsequently missing the 2014 football year.