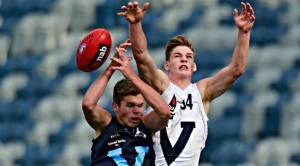 Suffering a serious knee injury in your draft year is certainly not ideal, but Gippsland Power key-position player Sam Skinner is finding several ways to keep himself positive during his recovery.

The 18-year-old has been nurturing his creative side as he shifts his focus away from the ACL he ruptured at the end of May while playing for Vic Country at the NAB AFL U18 Championships.

Skinner thought the weird feeling in his leg “couldn’t be too bad” when he went down in the Round 2 match against WA in Perth, initially getting back up and jogging around on it.

But the news soon came that the AFL Academy member was to miss the rest of the season and would have a lot more time to pursue his interests in music and art.

“I like to belt out a tune here and there,” Skinner said.

“I just sit around at home and play a bit of guitar and sing a little bit; I do a bit of drawing as well – I think it helps with how my recovery’s going.

“That’s why I’m lucky I can do the music and a bit of drawing.”

There are tentative plans for an acoustic trio to begin playing small gigs in the Gippsland area, but any potential music career would happily be put on hold to have a chance of playing football at the elite level.

Skinner hopes to be jogging on the knee in a few weeks’ time, but won’t be able to complete the physical testing at October’s AFL Draft Combine, for which he was announced as an invitee this week.

However, his knowledge of the game is sure to improve despite his absence from the field, with Skinner spending time in the Gippsland coaches’ box on game days.

“I enjoy it; I like getting up there, helping (head coach Leigh Brown) out and looking at the vision.

“Now I understand why there are so many coaches, because it’s too hard for the one coach to watch everything... Leigh handles that really well, so it’s good just watching how he goes about it.”

On the field, Skinner – a self-confessed tough judge of himself – said his form was “between average and good” before being injured.

At 197cm, he’s been played down back, up forward and in the ruck at times over the past three seasons, but thinks he feels most comfortable in a key defensive post.

It’s the position in which he won Vic Country’s MVP award at the 2013 U16 Championships, in a team that featured likely high picks at the 2015 AFL Draft Jacob Weitering, Josh Schache, Darcy Parish, Rhys Mathieson and Darcy Tucker.

Dandenong Stingray Weitering said if anyone in this year’s Vic Country crop could handle an ACL injury in the most positive manner possible, it was Skinner.

“For the first two rounds (of the U18 Championships), he was the life of the party, really,” Weitering said.

“It was a big loss, him going down with his ACL in WA.

“If there’s anyone who can deal with that sort of injury in the team, it’s Sammy Skinner – he has a lot of resilience and confidence in himself.”