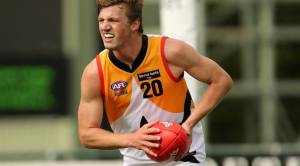 Several stars of the TAC Cup will have the chance to test their wares against senior opposition as 23rd men in the Peter Jackson VFL this weekend.

2015 U18 All Australian Nick O’Kearney from the Calder Cannons will represent Coburg in the Lions’ encounter with Frankston at Frankston Oval on Sunday.

O’Kearney has been one of the most prolific midfielders in the TAC Cup across his 10 matches this season, averaging 25 disposals per game.

Joining Rice at the home of football will be Murray Bushrangers 19-year-old David Mennen, who will represent Collingwood in the AFL curtain-raiser.

Mennen represented Vic Country during their undefeated U18 Championships campaign this year and has averaged 18 disposals per game in eight TAC Cup matches.

The 2014 U18 All Australian represented Vic Country again this year and has played eight matches in the TAC Cup as a half-back/midfielder, averaging 23 disposals per game.

Tucker will take to the field on the opposite side to fellow Vic Country representative Tom Cole from the Bendigo Pioneers, who will run out for the Cats.

Cole played every match for Vic Country in 2015 and has found plenty of the ball in the TAC Cup, averaging 25 disposals per game for the Pioneers in seven matches.

Sons of Western Bulldogs Steve MacPherson and Stephen Wallis will also take to the field this weekend, with Northern Knight Darcy MacPherson to will line up for Footscray while Calder Cannon Tom Wallis will put on the Essendon jumper.

Wallis will face one of the successful Vic Country squad members Will Sexton in the VFL.com.au video stream game, with the Geelong Falcon lining up for Werribee.