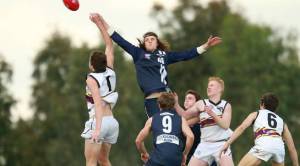 A shocking surfing accident almost two years ago has changed the life of Geelong Falcons ruckman Lochie Donne in many ways.

The Surf Coast native came off his board at Thirteenth Beach in late 2013 and hit a sandbar head-first, breaking one vertebra and dislocating three others.

With no control over his limbs and close to drowning, his girlfriend rushed into the water, put Donne on his board and saved his life by dragging him to shore.

Now, not even two years after doctors told him he may never walk again, Donne has played every game bar one for Geelong in 2015.

The laid-back 19-year-old jokes that perhaps a year off from playing for the Falcons as he recovered from the accident in 2014 has freshened him up for the current season.

Donne is happy with how his body has held up so far, but said nerve damage – a legacy of his accident – had affected his ability to mark the ball.

“I don’t have any feeling in my hands or part of my right arm and chest, so marking the ball is still quite difficult,” Donne said.

“I used to sort of feel it into my hands and now it doesn’t ever feel like it’s in my hands properly.

“I think I’ve learned how to just judge it – just know that it’s there, rather than actually feel it in my hands, I suppose.”

For a 196cm footballer, the ability to take a mark is one of the most valuable traits to have, but Donne’s situation has forced him to change the way he plays in the style of multi-positional AFL talls such as Geelong’s Mark Blicavs and Hawthorn’s Jarryd Roughead.

“I was sort of a ruckman previously, going around the ground trying to take pack marks, but this year I’ve just tried to play more like an extra on-baller,” Donne said.

“The marking side of my game’s almost been completely taken out, so I’ve had to improvise and play a bit differently – almost like Lance Franklin I suppose, because I try to get more ball on the ground.”

In his 13 matches this season, Donne has still averaged almost four marks per game, as well as 11 disposals, 14 hitouts and just under a goal per game to demonstrate his versatility.

It could be seen as a triumph that he has played even one match this year, let alone established himself in a talented Geelong side currently sitting in sixth position with three rounds to play.

Back in the months after the accident, the outlook was particularly grim.

Donne had come to accept he might never be able to walk again, but some unexpected positive news changed everything.

“Basically, I’d prepared myself for not playing sport again, probably never surfing again and I’m not sure what I was going to do work-wise,” Donne said.

“Pretty much after I had the surgery, the doctors told me I’d never be able to play again and I think it was about eight months later when they X-rayed it and said I actually might be alright to play.

“I sort of assumed I’d never play again and then all of a sudden I was right to play, so it was pretty overwhelming.”

Donne was back on the field for Colac U18s shortly after, so nervous about his return to the game that he didn’t want any of his family or friends in attendance.

“It was a pretty bad first game,” Donne said.

“I was playing at full-forward and from the first contest, the ball got kicked down (my way) and when I went to pick it up, someone shirt-fronted me and went straight through me.

“I landed on my tail bone, bruised all the bone and missed two weeks.”

After that incident and a handful of other matches played at less than peak fitness, Donne was almost ready to give up on football.

He was still on the Falcons list when the club came calling at the end of the 2014 season to see if he’d like to return as an overage player.

“But I thought: ‘It’s pretty much the last year I’ll be able to play juniors, so I may as well give it a crack and if I’m no good, I probably just won’t play again I guess.’

“So I sort of came in with a ‘nothing-to-lose’ mindset.”

Donne has certainly embraced his new lease on life. As well as grasping his opportunity at Geelong, he’s back out surfing every day he possibly can and is currently completing a carpentry apprenticeship.

That fateful day at Thirteenth Beach has changed him as a person.

“I guess you just see things from a different perspective,” Donne said.

“Sometimes you get down on yourself if you’re not playing footy the way you want to, but then there are some people who can’t even walk.