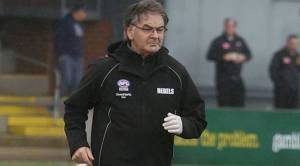 Henderson will be involved in his 400th TAC Cup game on Saturday when the Rebels face the Calder Cannons at Eureka Stadium.

He started volunteering at the club in 1993 and has treated and assisted AFL players such as Sydney 367-gamer Adam Goodes and North Melbourne 287-gamer Drew Petrie.

"Not only has Peter acted as our head trainer and U16 Development Squad head trainer, he has also played an enormous role in the development of past and present players due to his knowledge and understanding of the TAC Cup,” Partington said.

"He is highly regarded within the TAC Cup community and the Rebels are extremely grateful for the outstanding work and service Peter has put in over the past 23 years."