Cole cuts it at upper levels 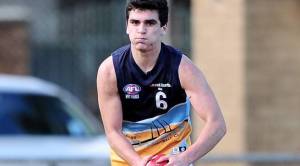 Tom Cole certainly hasn’t felt out of place stepping up from TAC Cup level to the Peter Jackson VFL this year.

The 18-year-old Bendigo Pioneers defender/midfielder has represented Geelong’s VFL side three times in 2015, being named in the team’s best players twice.

After spending most of the season in Bendigo’s midfield, Cole has relished the chance to return to half back at the Cats, a position he played as a bottom-ager at the Pioneers last year and where he said he’s “probably more settled”.

“I’ve played a lot in the midfield this year and not a lot down back, so getting to play down back with the Cats has been good,” Cole said.

“They’ve just sort of let me play my natural game and try to do what I do best, and I think the players around me have really helped too.”

Cole had 17 disposals at 100 per cent efficiency and took eight marks in Geelong’s 28-point loss to second-placed Sandringham at Trevor Barker Beach Oval on Sunday, receiving on-field advice from AFL-listed Cats such as Josh Cowan and Cameron Delaney.

The AFL Academy member said playing at senior state level was “a pretty nervy experience” at first, but he has clearly adapted quickly.

After also representing Geelong in Round 4 and Round 17 of the VFL season, Cole has found the experiences allowed him to return with added confidence to TAC Cup level, where he’s averaging over 25 disposals and six tackles per game in eight matches.

“I don’t think the pace of the game is a lot different at VFL level – it’s just the bigger bodies,” Cole said.

“It’s harder to win your own ball I suppose... but it makes it a lot easier to do so at TAC Cup level, so I think learning how to deal with that (in the VFL) even helps you play against kids your own size.”

Cole has had senior football experience previously too, at local level for Sandhurst in the Bendigo Football League.

Last year, he even played in a Grand Final against a Strathfieldsaye side boasting ex-St Kilda sharpshooter Stephen Milne, who booted six goals to help sink Sandhurst by 55 points.

Cole got a first-hand look at how the former Saints star goes about his business.

“I think he kicked one (goal) on me, but they took me off him after that.”

Not to be deterred, Cole has taken all before him in 2015, compiling performances with both the Pioneers and Vic Country that have him rated as a potential first-round selection at November’s NAB AFL Draft.

Having already shown his wares with and against AFL-listed opponents, Tom Cole should have few problems adjusting to the elite level if he’s lucky enough to make it there.

Better still, Stevie Milne will be nowhere in sight.