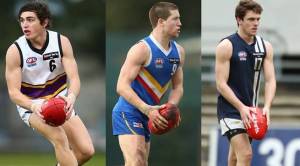 With the final round of the TAC Cup home-and-away season upon us, let’s have a look at how the positioning of the top eight could still change in Round 18.

The eight teams participating in finals are effectively settled, with the ninth-placed Sandringham Dragons a game and 14 percentage points behind the Calder Cannons, meaning the key races are those for the minor premiership and spots in the top four.

The North Ballarat Rebels and Dandenong Stingrays are the clubs in contention for the minor premiership and both are guaranteed to be involved in qualifying finals next week.

Despite sitting in North Ballarat’s shadow for much of the season, Dandenong is still in a position to swoop on the minor premiership and dislodge the Rebels from top spot, which they have held since Round 7.

The Stingrays are even on wins but 13 percentage points behind the ladder leaders, so they need to defeat the Geelong Falcons at Simonds Stadium and hope North Ballarat loses to the Oakleigh Chargers at Eureka Stadium to claim first spot.

The Falcons will be no easy beats however, as they’re in a tight battle with the Murray Bushrangers and Eastern Ranges for third and fourth positions – and a vital double chance in finals.

Geelong is currently sitting in fifth, half a game behind Murray in third and nine percentage points behind Eastern in fourth. It therefore needs to beat Dandenong while hoping that either the Bushrangers lose to the 11th-placed Bendigo Pioneers in Rochester or the Ranges lose to Sandringham at Rams Arena to claim a top-four spot.

On form, Murray will be highly favoured to travel to Bendigo and return with the four points, but if that doesn’t happen, the Bushrangers could even fall out of the top four if both Eastern and Geelong triumph – a position they wouldn’t have been in since Round 6.

Lower down, Calder can’t move out of eighth position, while Oakleigh (6th) will be facing the Gippsland Power (7th) in an elimination final next week.