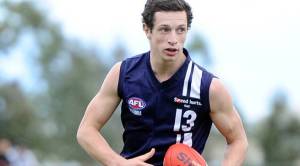 Former Geelong Falcon Darcy Lang has been named the Round 21 NAB AFL Rising Star nominee after an impressive performance for Geelong in the Cats’ draw with St Kilda at Etihad Stadium.

Originally from Colac, Lang was selected with pick no.16 in the 2013 AFL Draft despite breaking his leg and dislocating his ankle while representing Vic Country at the 2013 U18 Championships.

The 19-year-old has established himself in Geelong’s senior team in 2015 as a pacy forward/midfielder, playing all bar one match to take his career tally to 20 games after a single appearance as the substitute in Round 13 last year.

Lang recorded 16 disposals, three marks and one score assist against the Saints, and is currently ranked first for score assists at the Cats in 2015.

He is averaging 13 disposals per game and has kicked 13 goals in 19 games this season.