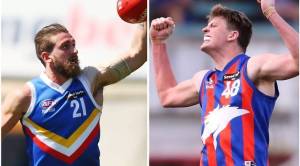 Week 3 of the TAC Cup finals has been completed in AFL Victoria's TAC Cup competition.

See below for week 4 of the TAC Cup finals - the Grand Final.

Metro teams Eastern Ranges and Oakleigh Chargers have made the season finale from 5th and 6th on the ladder - the pair being the last two premiership teams in the competition.

The game will also be live on Fox Footy from 11am.