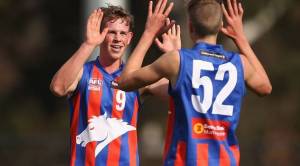 Losing isn't an option in this week's Eastern vs Calder and Oakleigh vs Gippsland match-ups.

Eastern won four more matches than Calder during the season and will fancy their chances after defeating the Cannons by 26 points at Bayswater Oval in Round 3. 19-year-old Anthony Brolic was superb for the Ranges that day, collecting 21 disposals and taking 11 marks, while ball magnet Ryan Clarke – who is averaging 40 disposals in the last three weeks – had 27 disposals and kicked two goals. The league leader for total tackles, Eastern’s Aaron Fenton, applied 15 of them in Round 3, while his teammate and 2015 league goalkicking leader Blake Hardwick booted two majors. For Calder, overage player Jack James (24 disposals, nine tackles, one goal) was a standout and Karl Brown – equal-second on the goalkicking table behind Hardwick – slotted two goals. In Clarke, James Parsons and Liam Jeffs among others, the Ranges boast a group of classy on-ballers, which means the ruck battle between Eastern’s Beau Mitchener (who leads the league in total hitouts) and Calder’s Mark Kovacevic (who played eight matches for Coburg in the VFL and Development League this season) for first use of the ball will be crucial.

The Chargers go into this match having lost four of five games since barely defeating Gippsland in the teams’ only encounter for 2015 in Round 13 at Warrawee Park. Oakleigh dominated in seemingly every area except on the scoreboard, earning only a three-point victory despite having eight more scoring shots. Led by Lachlan Walker (32 disposals, 12 clearances, 10 inside-50s, one goal), David Cuningham (28 disposals, 10 clearances, seven tackles) and Ben Crocker (25 disposals, eight inside-50s, one goal), the Chargers smashed Gippsland in the centre. They recorded significantly more disposals, hitouts, clearances and inside-50s, but just couldn’t turn that into scoreboard dominance, with Jordan Ridley (four behinds) and Dan Houston (1.3) the main culprits. Nash Holmes (26 disposals, 16 tackles, seven clearances, one goal) was a standout for the Power, who will benefit from having Josh Dunkley and Tom Papley alongside him in the middle after they missed the Round 13 clash. Gippsland’s twin 200cm towers Harry and Ben McKay (actually twins) will be important in key posts, while classy 17-year-old forward Ben Ainsworth will be one who Oakleigh’s defenders need to watch.

CLICK HERE to listen to both games live on TAC Cup Radio over the weekend.