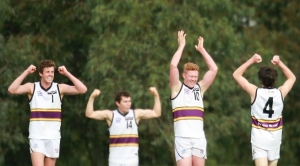 Preliminary final berths are on the line when Murray faces Oakleigh and Geelong meets Eastern in the TAC Cup semi finals this weekend.

Oakleigh was one of only a handful of quality teams to defeat Murray this year, doing so by 12 points (and with 12 more scoring shots) at Norm Minns Oval in Round 5. Charger Ben Crocker booted four goals that day (as he did against Gippsland in a big Elimination Final win), while 19-year-old Tom Phillips starred with 25 disposals and eight marks (also kicking four goals against the Power last week).

The Bushrangers were without key forwards Josh Schache and Zach Sproule back in April, who both hit the scoreboard in the Qualifying Final loss to Dandenong. A key for Oakleigh will be to stop the ball from coming in neatly to those Murray targets – as well as Max Canfield, whose three goals were important against the Stingrays – by winning first possession in the middle. The battle between Charger ruck combination Michael Wenn and Harry Thompson, and Bushranger big man Mitch King will be crucial. Oakleigh on-ballers Kade Answerth and David Cuningham had a field day against Gippsland due to Wenn’s dominance, while King struggled to contain Dandenong’s Gach Nyuon. Murray midfielders such as Clayton Oliver and Murray Waite will need to be on their game to help avoid a straight-sets finals exit.

Geelong may have defeated North Ballarat and Dandenong this year, but hasn’t been able to knock off Eastern in two encounters. In Round 8 at Simonds Stadium, the Ranges dominated from the outset as 10 goals from Blake Hardwick led them to a 40-point victory. Things were tighter in Round 14 at Box Hill City Oval though, as the Falcons rallied from 21 points down at the last change to draw the match. Geelong’s Rhys Mathieson had a blinder that day with 32 disposals and three goals, and the midfield battle he’ll be a part of will be crucial in determining the outcome of this match.

The likes of Mathieson, Darcy Parish and Harry Kershaw will need to neutralise the influence of Eastern’s midfield brigade, featuring Ryan Clarke (four goals in the Elimination Final win against Calder), Bryce Batty (28 disposals and eight clearances last week) and Liam Jeffs. If they receive silver service from 19-year-old ruckman Beau Mitchener, Hardwick and big Jayden Collins might be looking at profitable days up forward for the Ranges. But if the Falcons can win at the coalface, they have weapons such as Charlie Curnow and Brett Blair capable of capitalising in front of the big sticks too.