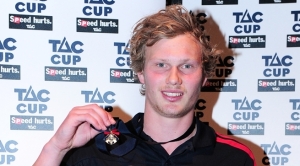 The Morrish Medal for the TAC Cup’s best and fairest player will be presented on Sunday night.

Let’s take a look at the contenders who are a chance of joining their ranks in 2015.

LACHIE TARDREW (Bendigo Pioneers)
Tardrew was a ball-magnet in 2015, ranking first in the league for total handballs and third for total kicks over his 16 matches.

BLAKE HARDWICK (Eastern Ranges)
Hardwick was a runaway winner of the league goalkicking title, kicking 42 goals in 12 matches – including bags of 12, 10 and eight.

CLAYTON OLIVER (Murray Bushrangers)
Oliver was ranked no.2 in the league for total handballs in 2015, averaging 24 disposals and kicking 18 goals across 14 matches.

BRAYDEN FIORINI (Northern Knights)
This ball magnet was ranked no.1 in the league for total kicks and total marks in 2015, averaging almost 32 disposals over 13 matches.

JACKSON VOLPATO (Western Jets)
Volpato was a shining light for the Jets this season, averaging 24 disposals and seven tackles per game across 15 matches.