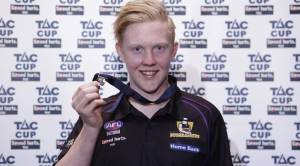 Murray Bushranger Clayton Oliver claimed the 2015 Morrish Medal for the TAC Cup’s best and fairest player in a thrilling conclusion to the vote count on Sunday night.

The 18-year-old midfielder trailed Eastern Ranges small forward Darcy Crocker by two votes before the final home-and-away round, but polled three votes for a 27-disposal, six-goal performance in Murray’s 66-point win against the Bendigo Pioneers in Round 18.

Crocker had led the count outright since Round 10 but didn’t feature in Eastern’s last match against the Sandringham Dragons, leaving the door open for challengers to swoop.

Oliver finished on 15 votes, one ahead of Crocker and Northern Knights captain Jade Gresham on 14.

Gresham and Ranges forward Blake Hardwick were also in a position to strike ahead of the final round – sitting just one vote behind Crocker – but Gresham only drew one vote for 33 disposals and three goals in one-point win against the Gippsland Power, while Hardwick had limited impact in a loss to Sandringham.

After only polling one vote in the first half of the season, Oliver emerged with a 14-vote flurry over the last nine rounds, including four best-on-ground performances – in a loss to the North Ballarat Rebels in Round 10, and in wins against Northern (Round 12), the Calder Cannons (Round 16) and Bendigo (Round 18).

The Mooroopna product played 14 home-and-away matches for the Bushrangers, averaging over 24 disposals and almost six tackles per game, as well as kicking 18 goals.

He was the no.2 ranked player in the league for total handballs and was judged to have the equal-most best-on-ground performances (four) by the umpires along with Hardwick.

Gresham polled in the most matches (eight) of any player, but bagged the three votes only twice.

With prolific midfielder Ryan Clarke finishing in fifth position on 12 votes and tackling machine Aaron Fenton one of three players two votes further back, the EasternRanges boasted four of the top eight on the final leaderboard.

Clarke was also in contention to snatch the Medal in Round 18 with a three-vote performance against the Dragons, but failed to poll for a 34-disposal, one-goal effort.

Gippsland, which has produced Morrish Medal winners in five of the last seven seasons, were best represented by Aloysio Ferreira, one of the three players on 10 votes along with Fenton and Murray key forward Josh Schache.

Oliver becomes Murray’s third Morrish Medallist in the club’s 23-year history in the TAC Cup, with Derek Murray (1997) and Farran Priest (joint-winner, 2008) the other Bushrangers to have triumphed.