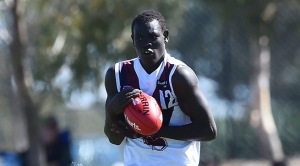 Sunday’s Young Guns Game at North Port Oval will provide plenty of fresh-faced Victorian talent with the opportunity to show their wares on a big stage in front of AFL recruiters.

Some may even seize the chance to convince a club to draft them later in the year, as Gold Coast’s Adam Saad did in the 2014 Young Guns Game.

VFL Academy Coach Darren Flanigan said the match could be the “icing on the cake” for AFL clubs wondering whether they should commit to drafting a certain player.

“Someone’s been drafted out of this game every year,” Flanigan said.

“Adam Saad had a really solid year playing half-back flank for Coburg in the VFL, and AFL clubs were saying ‘yes, no, yes, no, maybe’.

“The way he played in the Young Guns Game last year was outstanding; his kicking, his speed and his evasiveness was just unbelievable, and if clubs were close to committing to him, his performance sort of dotted the ‘i’ and crossed the ‘t’ for them.”

Flanigan said Saad’s subsequent performances for the Suns this season – playing 16 games as a dashing defender and earning a Rising Star nomination – demonstrated what can happen when a part-time footballer graduates to a professional environment.

According to Flanigan, players such as 20-year-old Werribee midfielder Matt Hanson could be in the same boat in this year’s Young Guns Game as Saad was in 2014.

Dynamic Footscray twins Will and James Hayes also impressed in the VFL in 2015, as did Coburg’s Lachlan Johns.

The Young Guns Game also gives opportunities to unlucky TAC Cup players such as Dandenong’s Liam Hullett and Oakleigh’s Tom Anderson, who haven’t been able to establish themselves in their finals-bound teams after suffering injuries during the season.

Several local league players will also make the step up to a higher level on Sunday, including Old Scotch’s Jono Daggian, Cheltenham’s Daniel Vaughan, Guy Hendry from Pines in the Mornington Peninsula Nepean FL and Dale Hinkley of Birchip Watchem in the North Central FL.

No matter where the player comes from, Flanigan said there’s one major goal of having them involved in the Young Guns Game.

“A lot of them are currently on the ‘maybe’ list,” he said.

“This is the sort of game that can do it for them.”

See below the Black and Green teams for the Young Guns Game: