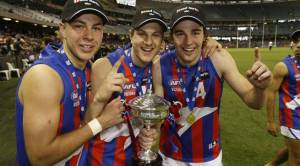 For the first time since 2009, Fox Footy will broadcast the season decider, starting its coverage at 11am on Sunday September 27 for an 11:05am bounce.

The match will be part of a big double header Grand Final day, to be followed by the Peter Jackson VFL Legendairy Grand Final at 3pm – to be broadcast on Channel 7.

AFL Victoria CEO Steven Reaper said it is great to have the game broadcast to a national audience after video streaming the match online in recent years.

“It is a great opportunity for our premier U18 competition to receive exposure on Fox Footy with the game to be broadcast live,” Reaper said.

“Some of the best talent from the competition will be on show, with 14 players from the Grand Final last year drafted to the AFL, including the likes of Darcy Moore, Jordan De Goey, Touk Miller  and TAC Medalist Toby McLean.”

The Grand Final sides will be decided this weekend at IKON Park on Saturday, with Dandenong Southern Stingrays facing Eastern Ranges at 11:15am and North Ballarat Rebels taking on 2014 premier Oakleigh Chargers at 2pm.