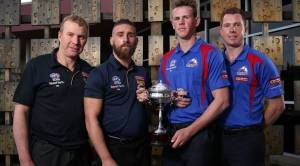 Find out all the information you need to know about the TAC Cup Grand Final.

Metro teams Eastern Ranges and Oakleigh Chargers have made the season finale from 5th and 6th on the ladder - the pair being the last two premiership teams in the competition.

The game will be covered on TAC Cup Radio from 10:45am and will also be live on Fox Footy from 11am.

These two teams have combined to win the last three TAC Cup premierships. Oakleigh claimed the flag in 2012 (by a golden point against the Gippsland Power) and in 2014 (by 47 points against the Calder Cannons), while Eastern took out the 2013 decider by 112 points over the Dandenong Stingrays.

The Chargers were also runners-up in 2011 when they lost to the Sandringham Dragons by eight points, so the club is certainly no stranger to the biggest stage of the year.

During the week, the coach and captain of both teams gathered for the official media conference. Hear from Darren Bewick, Darcy Crocker, Mick Stinear and Ben Crocker.

See the squads of 27 for the two teams - Box Hill Hawks and Williamstown.