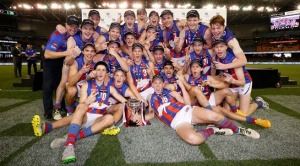 The Oakleigh Chargers claimed their third TAC Cup premiership in four years after holding off the Eastern Ranges by 12 points in a game of big momentum swings at Etihad Stadium on Sunday.

On the back of periods of stoppage dominance led by TAC Medallist Kade Answerth, the Chargers established a 30-point lead by half time and then weathered a fierce third-term comeback by the Ranges to prevail in a tense final quarter.

In the first Grand Final since 1999 between two teams that finished outside the top four, Oakleigh won its fourth premiership (adding to flags in 2006, 2012 and 2014) after finishing sixth at the conclusion of the home-and-away season (the Ranges finished fifth).

The victory also continued a remarkable start to Michael Stinear’s TAC Cup coaching career, with the Chargers leader having now won two flags in his first two years in charge at the club.

In a frenetic, pressure-packed opening quarter, Oakleigh 17-year-old Pat Kerr put the game’s first major on the board at the 10-minute mark, before livewire 16-year-old Stephenson answered almost immediately.

The Chargers soon established an advantage at the stoppages, with superb clearance work by Answerth (30 disposals, 10 clearances, seven tackles) and Lachlan Walker (20 disposals, five clearances) creating golden opportunities for Tom Phillips (two goals in the first quarter) and Pat Phillips (one) to score from general play.

While their dangerous teammates up the ground booted 4.2 from nine inside-50s in the first term to build an 11-point quarter-time lead, Oakleigh defenders Harvey Hooper and Sam McLarty were able to thwart multiple forward thrusts from the Ranges.

Those defenders barely saw the ball early in the second quarter though, as a clearance advantage became dominance for the Chargers. Harry Thompson was the chief beneficiary, scoring two goals in the first three minutes of the term.

When Walker kicked another major shortly after, the margin was out to 30 points and a blow-out was on the cards. However, Eastern’s team defence stiffened.

Jordan Gallucci (eight disposals) moved the ball daringly from half-back, Jayden Cyster (15 disposals) had several classy touches through the corridor and Blake Hardwick finally ended a run of missed opportunities for the Ranges inside 50 to convert a much-needed major in the shadows of half time.

Despite a potentially dispiriting goal to Oakleigh captain Ben Crocker after the half-time siren, Eastern’s momentum continued into the third stanza.

Ranges skipper Darcy Crocker (19 disposals, eight tackles, five clearances) was injected into the middle and, along with hard-nuts such as Aaron Cotte (20 disposals, four clearances) and Bryce Batty (nine disposals, three clearances), began turning things around at the coalface.

Eastern piled on five unanswered goals – including two to Stephenson and Hardwick’s third major following a free kick paid on the three-quarter time siren – to bring the margin back to two points with a quarter to play.

But the move of Alex Morgan into the forward line changed the momentum of the match once again, as the Chargers 19-year-old took a big contested mark and converted the resulting set shot to give his team breathing space early in the final quarter.

From there, an Oakleigh press – marshalled by key defender Jack Firns (nine disposals, five marks) – was able to limit the run-and-carry of the Ranges from defence until Cotte burst from a pack to goal and bring Eastern to within six points with three minutes to play.

A golden-point outcome was suddenly a possibility, until a perfect pass from Chargers ruckman Michael Wenn (35 hitouts, nine disposals) found Pat Phillips for the sealing goal just a minute later.