A fly on the wall at the Draft Combine 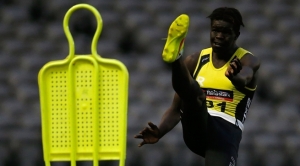 The NAB AFL Draft Combine is certainly a unique event to be a part of.

For the 82 young men (including 46 TAC Cup players) whose physical and mental capabilities are analysed to the nth degree over four days at Etihad Stadium, it was surely one of the most testing and perhaps strangest experiences of their lives.

But the Combine is an event at which it’s also quite interesting to be a fly on the wall, observing how the players interact with AFL club personnel, the media and each other.

Here are some observations from the two days of physical testing on Saturday and Sunday.

With the Etihad Stadium roof open and the sun shining through on the purpose-built German testing floor, the first prospective draftees emerged from the depths of the ground for the 20m sprint, agility and vertical jumping tests. Their nervousness was palpable, but AFL Academies High Performance Manager James Veale quickly focused their minds for the challenges ahead, noting there was tension in the air but that the Combine was what the players had worked so hard towards. Veale urged them to “leave nothing out there”.

The agility test involved players zig-zagging around a course of five posts as quickly as possible. An early highlight was Bendigo Pioneer Aidyn Johnson recording a slick time of 8.15s having recently overcome a serious quad injury that caused him to miss all bar the first match of the TAC Cup season. Oakleigh Charger Alex Morgan (8.07s) and Murray Bushranger Clayton Oliver (8.11s) were others to finish just behind the overall agility test leader, Tasmania’s Kieran Lovell (7.90s).

The 20m sprint produced several performances that elicited gasps from the players watching. The first was Dandenong Stingray Tom Glen’s run of 2.90s, before Dandenong teammate Kurt Mutimer and then Morgan bettered that time with runs of 2.88s. Eastern Ranges captain Liam Jeffs seemed to have trumped them all with a time of 2.85s, but it was a mistake that was later rectified to be 2.89s. Another typo had Oliver putting up a near-superhuman time of 2.03s, but unfortunately for the big-bodied midfielder it was quickly changed to 3.03s.

It was interesting that different groups of Combine participants seemed to be more vocal in their support for each other’s performances, no matter which state they were from. Tests were completed by different groups based on height and position played, and it seemed as though the small midfielders, defenders and forwards were the most willing to support their fellow vertically-challenged group members. Strangely, not a great deal could be heard from the taller guys...

Dandenong’s Gach Nyuon demonstrated what an enigmatic athlete (and personality, according to many) he is across the weekend. The leaping ability of the 201cm ruckman of Sudanese origin saw him equal Nic Naitanui’s absolute running vertical jump record on Saturday, while he recorded a brilliant 20m sprint time for someone of his height with 2.95s – after he worked out which foot to take off on. For the repeat sprint test, Nyuon had to wait until the very last heat and spent much of his time in the interim pacing behind the testing area like a caged lion.

For a colourful description of how it feels to complete the repeat sprint test, it’s hard to go past what one Vic Country player was overheard saying to a fellow Country boy: “The first two sprints are easy. On the third, you start to feel it; by the fourth you’re #@!*$% and the last two are just on pure gut.”

It’s fair to say Saturday afternoon’s gruelling beep test wasn’t one of the more anticipated tests of the Combine. While WA’s Joshua Schoenfeld recorded a 16.2 (the second-best effort in Combine history behind ex-Stingray Billy Hartung’s 16.6 in 2013), Victoria’s best showings were by North Ballarat Rebels captain Darcy Tucker with a 15.3 and Dandenong’s potential no.1 draft pick Jacob Weitering, who further demonstrated how well rounded he is as a key defender by running a 15.1.

Calder Cannons tall forward Callum Moore pulled out of the beep test rather early after recording very impressive times in the 20m sprint and repeat sprint tests earlier in the day. Unfortunately he’d injured his hamstring, and while he participated in Sunday’s 3km time trial, it was evident he was being held back. However, the 19-year-old would be happy to have already demonstrated how exciting he is as a big man with his burst running.

While many of the Combine participants relaxed ahead of the beep test in the players’ common room – complete with air hockey table, Daytona driving simulators and pinball machine – Calder’s Hisham Kerbatieh took some time to pray in a quieter part of Etihad Stadium’s Victory Room. Kerbatieh is a practising Lebanese Muslim and won the Bachar Houli Academy Medal last year for his achievements both on the football field and in the community.

Northern’s Tyrone Leonardis had the right to feel a little aggrieved after the beep test when some of his fellow Knights were asked to have their photo taken on the boundary line. His more high-profile teammates Jade Gresham, Darcy Macpherson and Brayden Fiorini were lined up for a rather serious-looking profile shot... as Leonardis watched on just metres away. However, the highly-skilled running defender could soon force his way onto people’s radars if a season of rapid improvement at the Knights sees him drafted to the AFL in November.

Sunday’s 3km time trial was a fitting finale to the Combine, with Schoenfeld’s time of 9m 15s breaking Jack Hiscox’s record of 9m 18s set last year. The best TAC Cup performer was Dandenong’s Thomas Jok, who even looked laconic early in the run before flying at the finish to record a time of 9m 47s. The next best was North Ballarat Rebel Daniel Rioli (10m 09s), who was overtaken metres from the finish by Queensland’s Ben Keays after leading his heat almost all the way. Gippsland Power midfielder Nash Holmes (10m 16s) was also impressive, but accidentally knocked over the same post marking the lead-in to the finish on three consecutive laps – maybe Nash just wasn’t enjoying his leisurely jog on a fine Melbourne morning.

There were a handful of TAC Cup players not participating in some or all of the testing due to injury, but with Year 12 exams just around the corner, it appeared as though Oakleigh’s Jack Silvagni had a reason in addition to his sore shoulder. On the board listing injured players ahead of the 3km time trial, Silvagni’s name had ‘shoulder/studying’ next to it. Could it have been a sneaky effort from Jack to show recruiters how conscientious he is? Well, no – it seems his captain at the Chargers Ben Crocker was the one to blame for the stitch-up. It was also good to see plenty of those injured players on the ground to help out with the skills testing on Friday night. They no doubt enjoyed watching the endurance events from the stands, but there’d be no spectating when the footballs came out.

As it happens, Jack Silvagni’s dad Stephen was copping it on Sunday as well. The Carlton list manager made sure to sit one bay across from his former GWS colleagues in the stands but it wasn’t far enough to stop the Giants recruiting team giving him plenty of good-natured lip. The AFL Draft is taken pretty seriously by most these days, but it’s good to know that even those responsible for potentially changing the lives of young men can be kids at heart after all.