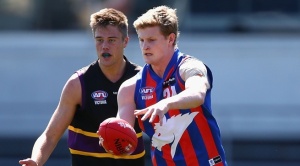 Oakleigh key defender Jack Firns barely made it to the starting line for the Chargers’ recent TAC Cup Grand Final triumph over the Eastern Ranges.

The 18-year-old fractured the fourth metacarpal bone in his right hand in the opening minutes of Oakleigh’s preliminary final win over the North Ballarat Rebels.

He thought his chances of getting up for the premiership decider were slim early in the week, but after passing a fitness test, took to Etihad Stadium on the Sunday and starred in his team’s 12-point victory.

Firns returned to the Docklands venue over the weekend for the NAB AFL Draft Combine, where he was one of several TAC Cup draft prospects unable to complete all physical testing at the event due to injury.

Bearing a protective cast on what has proven to be a very effective spoiling hand, Firns didn’t participate in Friday night’s skills testing but produced some excellent performances in the endurance running tests.

Firns was happy to still be able to show his endurance running capabilities at the Combine after his Grand Final near-miss.

“About the first minute of the game (against North Ballarat), I just fell over chasing my opponent,” Firns recalled.

“I put my hand out to protect myself and did a spiral fracture in my fourth metacarpal... it wasn’t too fun.

“The day after, I didn’t think I’d be able to play in the Grand Final, but as the week progressed, my chances increased and I was lucky enough to be picked after just passing the test.

“They tested that I was able to spoil and mark and tackle, and there was no way (coach) Mick Stinear and the selection committee were going to pick me if couldn’t do anything 100 per cent.

The job performed by the 194cm key defender was instrumental in the Chargers halting a third-term comeback that saw the Ranges recover from a 30-point half-time deficit to draw within two points at the last change.

Bushrangers key forward Schache was another to play during his team’s TAC Cup finals campaign in pain.

The 199cm potential no.1 draft pick sustained a toe injury in the week before Murray’s semi-final loss to the Chargers. He was passed fit to play but hurt the toe further as the match went on.

“In the first half it was actually OK and then after that I struggling a fair bit,” Schache said.

“I had to go into the ruck and I could barely run around.”

Schache still took eight marks and kicked 2.4 in a hard-leading performance opposed at times to Firns.

Luckily for Schache, Firns and many of the wounded in attendance at the Combine, they were already known quantities to AFL recruiters and, as such, their absence from testing was not the end of the world.

But that doesn’t mean the legacies of a gruelling season at the elite underage level weren’t still highly scrutinised.

“Some of the boys had all of the guys in there (for the medical testing) – all the doctors from each AFL club looking at them, checking them out,” Schache laughed.

“A few of them had a close look at the toe... but I was lucky to only have a few of them in there.”