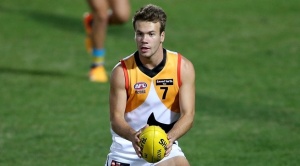 Bailey Rice has made ‘that’ decision.

The Dandenong Stingrays AFL Draft prospect had the unique choice of nominating between two clubs as his preferred destination under the father-son rule.

The 18-year-old spent time at St Kilda’s Seaford headquarters throughout 2015 and also played two matches for Carlton’s VFL affiliate the Northern Blues to gain a feel for the operation of both clubs.

But last week – despite being a Carlton supporter – Rice chose St Kilda as his first preference.

His dilemma had attracted significant media interest recently, due in part to the skilful 184cm defender’s emergence in 13 games with Dandenong in the TAC Cup and four with Vic Metro in the U18 Championships this year.

At last weekend’s NAB AFL Draft Combine, the Beaconsfield junior said he had surpassed his expectations in 2015.

“Last year I think I was on that mark just to get a game (with the Stingrays), but this year it kind of surprised me in a way,” Rice said.

“I always believed in my ability that I’d be able to do what I did this year, but I think I’ve still got more to offer.”

Rice settled into a role at half back this season, averaging 21 disposals and six marks per game for Dandenong, while a kick-to-handball ratio of 2.7 to 1 demonstrated the confidence in his dangerous kicking boot.

“I think my biggest strengths would probably be skills – kicking and marking – and my smarts around the ground,” Rice said.

“When you play down back, you need to read the play and roll the dice or stay with your opponent.

Rice said his ball-winning ability improved in 2015 and he can see himself eventually transitioning from defence into an on-ball role at AFL level, as one of his Carlton favourites Bryce Gibbs has done in recent seasons.

“The reason why I haven’t played as much in the middle is (I’ve needed to work on) getting that fitness base up,” Rice said.

“Last year, my fitness wasn’t that great and I’ve worked on it from then until now and I think I’ve improved a lot, so I think moving into the midfield is a big thing for me.”

Rice’s preparations for a possible AFL career were furthered by playing two matches at VFL level for the Northern Blues in August, collecting 11 disposals against Collingwood and 14 against Sandringham in his customary role off half back.

It took time for him to adjust to the increased speed of the game, but the extra physicality was something Rice relished.

“I thought I felt pretty comfortable playing there; I felt like I belonged,” he said.

“I’m sure it’d be another massive step up from VFL to AFL, but I think getting those two VFL games under my belt helps a lot with my confidence and seeing what the game is like at that level.”

And in terms of preparing mentally for a transition to the elite level, it helps to have a father who’s been there and done that.

“(Dad’s advice is to) just enjoy playing footy; enjoying playing the game is the main thing.”

With the Saints boasting a promising young list and moving in the right direction under coach Alan Richardson, Bailey Rice might just find that pretty easy to do.