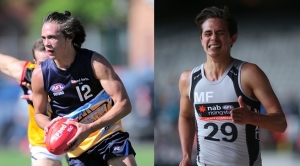 The 17-year-old Bendigo Pioneers speedster played in just the first TAC Cup match for 2015 before sustaining a nasty long-term quad injury shortly after that kept him out of action for the remainder of the season.

Johnson learned some hard lessons in mental toughness over the subsequent months, before finally ramping up the strength and conditioning work for his legs around two months ago.

But that wasn’t enough to remove the lingering fear that his quad muscle might fail him again in front of AFL recruiters at Etihad Stadium.

“I’m pretty nervous but I am testing, so I’m pretty excited,” Johnson said at the Combine, before the physical tests had commenced.

“I was on the MCG playing against the Northern Blues with the AFL Academy (in April) and I picked the ball up, took a bounce and it (the quad) just went.

“I was devastated when it happened and it’s been a long road back to recovery.

“I definitely got a lot of resilience out of being on the sidelines for so long – it was very tough.

“(I learnt to develop) the mental toughness to get through it, and to just have patience and trust in the process of recovery that you’ll be right to come back.”

Johnson certainly showed he was back at the Combine, recording the fourth-best time (8.15s) behind Tasmania’s Kieran Lovell (7.90s) in perhaps the biggest examination for his rehabilitated quad, the agility test.

He also proved his endurance running capabilities by reaching level 14.4 in the beep test and finishing not far behind star Combine performers and North Ballarat Rebels teammates Daniel Rioli and Darcy Tucker in his 3km time trial heat.

But despite his fine Combine results, the AFL Academy member said he was “not too sure” about whether he’d shown enough in nine TAC Cup games in 2014 to convince recruiters to draft him.

Johnson averaged 13 disposals and four tackles per game as a 16-year-old at Bendigo last year, including a four-goal effort in a rare win against eventual top-four team the Geelong Falcons in June.

“I had a pretty inconsistent year last year,” Johnson said.

“I had some good patches, but I’m pretty nervous (about my draft prospects); I hope it works out for me.

“I reckon my speed and evasive skills (are my biggest footballing strengths) and I think I’m pretty competitive, so hopefully that gets me there.”

The rangy 184cm half-forward/wingman pointed to a couple of multiple-premiership-winning Hawthorn stars when asked which AFL players he likes to model parts of his game on.

“I think everyone loves Cyril Rioli and the way he impacts the game with every touch... Quality touches – that’s what I want to model myself on,” Johnson said.

“Also like a Brad Hill, streaming down a wing with so much pace and a very good aerobic capacity.”

Like Rioli and Hill, Echuca product Johnson has indigenous heritage and took the chance during his enforced lay-off to expand his knowledge of Australian history while boarding as a student at Scotch College.

“I guess there was a positive out of the injury – I started focusing on school a bit more and started going well at school,” Johnson said.

“I do Australian history at the moment, and thinking about it, if you didn’t do that subject, you wouldn’t know much about early colonisation.

“I want to do indigenous studies – that really interests me and I’d look to go down that path (in future).”