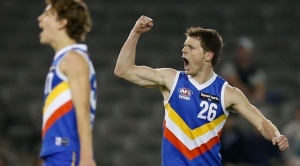 Blake Hardwick’s 56th and final goal of the TAC Cup season showed how capable he is of grabbing a big occasion by the scruff of the neck.

The competition’s leading goalkicker for 2015 had already bagged two majors as the Eastern Ranges rallied from 30 points down during the second quarter of the Grand Final to be within eight points of the Oakleigh Chargers in the shadows of three-quarter time.

18-year-old Hardwick won a free kick close to Eastern’s 50m line as the siren sounded then went back and nailed a booming set-shot goal to draw his team within a kick of the Chargers with a term to play.

The Ranges didn’t manage to overcome Oakleigh – eventually losing the decider by 12 points – but Hardwick showed he was a man for the moment.

At the recent NAB AFL Draft Combine, the livewire 181cm forward said nerves fired him up rather than held him back and at Etihad Stadium on Grand Final day, it allowed him to show his improvement from the previous year.

“I’ve been practising a lot of goalkicking and kicking straight, because last year I probably didn’t kick as straight as I would’ve liked,” Hardwick said.

The work has paid off.

He produced best-on-ground performances by booting 8.2 against the Western Jets in Round 1, 10.1 against the Geelong Falcons in Round 8 and 12.5 against the Bendigo Pioneers in Round 16, as well as booting 10 majors across Eastern’s four finals matches.

Hardwick said his biggest footballing weapon is his strength in one-on-one contests, and that winning early battles with his opponent would indicate whether he was in for a big day.

“I guess it depends on your opponent – if you take a few marks and you feel like you’ve got him, you feel pretty good,” Hardwick said.

“I thought (Geelong defender) Tom Doedee was probably the best player I’ve played on throughout the year – he’s pretty strong in one-on-ones as well.

While the 187cm Doedee was missing for their teams’ Round 8 clash, the match was a turning point for Hardwick, with a season-ending injury to one of his teammates seemingly benefiting him in the second half of the year.

Highly-rated Ranges key forward Sam Weideman missed most of the TAC Cup season after aggravating an ankle injury against the Falcons in May, changing the dynamic of Eastern’s attack and elevating Hardwick into the role of the team’s main forward target.

“At the start of the year, I probably wanted to play a bit more on-ball, but losing a few forwards didn’t help so I stayed in the forward line,” he said.

From the outside, Hardwick seemed to thrive on the added responsibility, but he said he would’ve preferred Weideman’s taller presence alongside him to distract pesky defenders.

“I think when Sam played, it actually made it a bit easier because he’d get the main backman and the attention would be on him,” Hardwick said.

But having seized his opportunities at crucial moments this year, now Blake Hardwick is receiving a different type of attention – the type that could see him on the big stage of the AFL come November’s draft.