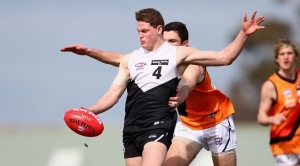 It’s been difficult for Jacob Hopper to approach his football like most other AFL Draft prospects this year.

The 18-year-old North Ballarat Rebel grew up in the NSW town of Leeton near Wagga Wagga and is zoned to the GWS Giants Academy.

The Giants will have the first option to match bids for Hopper at the upcoming Draft and will likely need to use a number of picks to secure the talented midfielder.

Despite missing large chunks of last season through knee and hand injuries, he’s played through 2015 with near certainty that he’ll be drafted.

But what’s not certain is whether it will be by GWS.

“I think (keeping an open mind regarding my potential destination) is what I’ve done all year and I don’t think there’s any point in changing,” Hopper said at the recent NAB AFL Draft Combine.

“I think I’ve always looked at it that I’m like any other kid in the Draft and I can go anywhere, so I think it’s just about staying level-headed with that attitude.”

Hopper’s move to Ballarat to attend St Patrick’s College and play for the Rebels ahead of the 2014 season has complicated the situation with the Giants.

The AFL Academy member spent a week at the club late last year and more time there in June when he played a match for the GWS team in the NEAFL.

But Hopper said his time with the club’s academy had been “a bit limited” due to living in Ballarat, a city he had come to think of fondly.

“I love the place and love the people there at St Pat’s and the North Ballarat Rebels, but the weather’s obviously not the most enjoyable,” Hopper laughed.

“But I have loved being there and I’ve loved making the move there two years ago now.”

Putting his unique form of draft uncertainty aside, Hopper capitalised on finally being fit to produce stellar performances for several teams this year.

His good form started in April with the AFL Academy’s two matches against VFL opposition, before Hopper embarked on a 12-match season with TAC Cup minor premier North Ballarat, in which he kicked 26 goals and averaged 23 disposals per game.

A highlight was a 27-disposal, two-goal performance in the Rebels’ preliminary final loss to the Oakleigh Chargers while battling accumulated groin soreness that saw him kept out of all physical testing at the Draft Combine.

Hopper also earned All Australian selection after averaging 26 disposals, eight clearances, six inside-50s and one goal per game across three matches for NSW/ACT in Division 2 of the U18 Championships, as well as helping lead St Patrick’s to a sixth consecutive Herald Sun Shield title.

“I went into the season just hoping to play some footy because I’ve been injured a fair bit over the past two to three years, so it was nice to just be able to stay on the track and string some consistent footy together,” Hopper said.

“I think the first half of my season (was particularly memorable) and then I was pretty happy with my Championships... finals footy as well.

Hopper said he grew up wanting to be a midfielder because they were always in the thick of the action and he loved “just being around the footy”.

Injury-free this year, he’s shown what can happen when he has a proper chance to do just that.