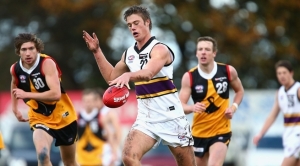 Josh Schache’s 2014 off-season has him primed to be taken with one of the first two picks at the upcoming AFL Draft.

The 199cm Murray Bushrangers key forward kicked 27 goals in 15 TAC Cup matches last year, but realised he needed to work on elements of his game to reach a new level in 2015.

18-year-old Schache responded with dominant performances in front of goal for the Bushrangers and for Vic Country at the U18 Championships.

He booted 34 goals in 10 TAC Cup matches, including best-on-ground efforts for seven goals against the Bendigo Pioneers in Round 2 and five majors against the Gippsland Power in Round 14.

But the Seymour junior’s masterpiece was his six-game, 24-goal U18 Championships campaign for the undefeated Vic Country team, for which he was awarded the Larke Medal as the best player in Division 1.

“At the start of the year, I found out I needed to work on my game a fair bit,” Schache said at the recent NAB AFL Draft Combine.

“There were a few aspects I needed to work on and I worked on them pretty hard over the pre-season.

“A lot of it was fitness-based and making sure that my skills – especially goalkicking – were up to scratch.”

Schache wasn’t able to do any of the physical testing at last month’s Draft Combine due to a toe injury sustained during Murray’s TAC Cup finals campaign.

But the AFL Academy member’s capabilities were already well known to recruiters, the fruits of his labour over the off-season evident in his hard-running forward work and outstanding accuracy in front of goal throughout 2015.

Even when carrying the toe injury in the Bushrangers’ semi-final loss to the Oakleigh Chargers, Schache continually provided a target inside 50 with 16 disposals and eight marks while kicking 2.4 in blustery conditions at Ikon Park.

An element of his game some observers may not be so familiar with is his ability to compete in the ruck when required.

Schache’s greater fitness base allowed him to spend more time in the thick of the contest this season, recording hitouts in each of his 10 TAC Cup matches.

“I spent a fair bit of time in the ruck through some games,” Schache said.

“Playing as a key forward sometimes doesn’t go your way and it doesn’t come down there a lot, but you can go in the ruck and have an impact around the ground.

“I feel most comfortable playing mostly down forward, but if I need to go into the ruck, I’d be more than happy to.”

That’ll be music to the ears of the holders of picks no.1 and 2 at the Draft, Carlton and the Brisbane Lions.