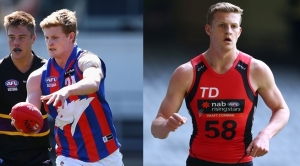 Jack Firns has taken on and matched it with some of the best key forwards in the TAC Cup this season.

It was an impressive effort from the Oakleigh Chargers 18-year-old, given he managed only two TAC Cup games in 2014 and, by his own admission, was one of the last additions to the Vic Metro squad for this year’s U18 Championships.

194cm Firns has now made a name for himself as a close-checking key defender capable of blunting the influence of the opposition’s most dangerous big men in front of goal.

He named potential match-winners Eastern’s Sam Weideman, Geelong’s Charlie Curnow and Murray’s Josh Schache as some of his biggest challenges in 2015.

“I played on a few really good players (this season),” Firns said at the recent NAB AFL Draft Combine.

“I kind of like that one-on-one battle with the stronger guys... (And) all three of those were probably the toughest match-ups of the year.

“I’m pretty happy with how I went against all of them.”

Firns kept 196cm Weideman – a highly touted draft prospect despite missing much of the season through injury – to 10 disposals, four marks and one goal in a win over the Ranges in Round 2.

The St Kevin’s College product also limited 191cm Curnow to 13 disposals and two goals in a Round 17 loss to the Falcons and 199cm Schache to 16 disposals and a couple of majors in Oakleigh’s semi-final victory over the Bushrangers.

In addition, he was an integral part of Oakleigh’s recent premiership triumph over Eastern, continually helping to repel opposition forward thrusts in the face of a Ranges comeback from a 30-point half-time deficit.

Remarkably, Firns did so with a fracture in his hand sustained in the previous week’s preliminary final.

Combined with five appearances for Vic Metro in the U18 Championships, his performances culminated in an invitation to the Draft Combine that would’ve been highly unexpected at the start of the season.

“I never expected to be here this time last year, so I’m just happy with how it’s all happened this year,” Firns said.

“I got added to the Vic Metro squad – I was almost the last addition – so I was very lucky to be part of that.

“Anything from here’s a bonus.”

With tall, lock-down defenders always in demand at the elite level, Firns may just be receiving that bonus at the upcoming AFL Draft – and if recruiters wanted to see more of what he’s capable of at the Combine, they got it.

Firns demonstrated his impressive reach with top-10 finishes in the absolute and relative standing vertical jump tests, and his endurance running capability with good showings in the beep test and 3km time trial.

But there’s one intangible any good key defender needs in their arsenal.

“My teammates probably like to think I’ve got a bit of white-line fever,” Firns said.

“I don’t know if I’d call it that, but I’m pretty competitive on the field and that’s probably my number-one strength.”

Firns said he enjoyed watching some of the most competitive key defenders going around, including Richmond’s All Australian Alex Rance and Hawthorn’s recently retired triple-premiership player Brian Lake.

Oakleigh’s tall backmen have also had the privilege of learning directly from one of the best, Rance’s Tiger teammate Troy Chaplin, who has a role as a defensive coach at the club.

“He’s helped me out a lot this year,” Firns said of Chaplin.

“He’s not the fastest bloke in the world – he probably wouldn’t like me saying that – but just using starting positions is one thing he taught us to do, to counteract your own lack of speed.”

After a year of rapid development, Jack Firns has now shown he has the athletic traits, experience against the country’s best young key forwards and quality education to be one of the best key defensive draft prospects you’ve haven’t heard of.