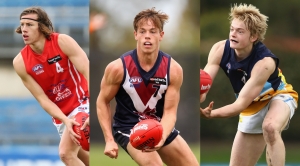 Let’s take a look at the 2015 best-and-fairest winners from all 12 TAC Cup clubs, including six over-age players, one bottom-ager and six who represented Vic Country or Vic Metro at the AFL U18 Championships.

Bendigo Pioneers: Lachie Tardrew
Tardrew’s emergence as a prolific midfielder saw him claim the Neville Strauch Memorial Club Champion award. The 18-year-old Sandhurst junior averaged 29 disposals and six tackles per game across 16 matches to be named in the TAC Cup Team of the Year and win the best-and-fairest count ahead of Marty Hore in second and Joseph Atley in third. Atley was also named the club’s Most Consistent Player, while Bailey Edwards won the ‘Pioneers Pillars’ award and Jesse Muscatello the Coaches Award.

Calder Cannons: Bruno Laguda
Laguda took out the Robert Hyde Medal after a consistent season as a running defender, averaging 20 disposals per game over 17 matches. The 18-year-old Essendon Doutta Stars product regularly showed off his skilful kicking boot, recording a kick-to-handball ratio of 2.1-to-1 and was rewarded with an invitation to participate in the AFL Victoria Young Guns Game. He just edged out Tom Wallis – who won the Most Improved Player award – in second, while Nick O’Kearney finished in third position. Matthew Stillman took home the Coaches Award on the night.

Dandenong Stingrays: Daniel Capiron
Capiron made the most of his overage year at Dandenong by winning the club’s Justin Leppitsch Best and Fairest Award. The 19-year-old Caulfield Grammarian played 12 matches, averaging 18 disposals and six marks per game as a running defender adept at reading the play. He also represented the title-winning Vic Country team at the U18 Championships and played seven matches at VFL level for Frankston.

Eastern Ranges: Ryan Clarke
Clarke’s rise as a potential first-round AFL Draft selection saw him take home the Pennington Medal ahead of Anthony Brolic in second and Aaron Fenton in third. The 18-year-old Rowville junior averaged 28 disposals per game and kicked 16 goals across his 12 matches, starring in Eastern’s finals campaign with his relentless running through the middle of the ground. Dylan Clarke won the club’s Finals MVP award, Darcy Crocker was the Coaches Award winner and Beau Mitchener was named the club’s Most Improved Player.

Gippsland Power: Christian Buykx-Smith / Ben Ainsworth
19-year-old Buykx-Smith and 17-year-old Ainsworth shared the club’s Best and Fairest Award after outstanding seasons. Buykx-Smith, a Traralgon product, averaged 11 disposals and three marks per game over 16 matches playing mostly as a key defender, and also represented Vic Country at the U18 Championships. Ainsworth, from Morwell, has a big 2016 ahead of him after starring as a dynamic bottom-age forward for Vic Country, as well as averaging 17 disposals and over one goal per game across 13 TAC Cup matches. Tom Papley and Ben Dessent were joint-runners-up, while Buykx-Smith won the Coaches Award, Ainsworth the Best First-Year Player award, Josh Patullo the Most Professional Player award and Aloysio Ferreira the Most Improved Player award.

Murray Bushrangers: Clayton Oliver
Oliver added to his 2015 Morrish Medal success by taking out Murray’s John Byrne Medal. The 18-year-old from Mooroopna burst onto AFL Draft radars with a stellar season as a goalkicking midfielder, booting 20 majors – including six in one appearance – and averaging 24 disposals and almost six tackles per game over 16 matches. He finished ahead of Murray Waite in second and Ryan Garthwaite in third, while Jake Marshall won the Coaches Award, Brady Sharp the Most Improved Player award and Jy Simpkin the Under 17 Award.

Northern Knights: Jade Gresham
Gresham, the Knights captain, capped off a superb season in which he emerged as a possible first-round AFL Draft pick by winning Northern’s Best and Fairest award. The 18-year-old South Morang product also took home the TAC Cup Coaches Award and earned selection in the TAC Cup Team of the Year in 2015, as well as finishing second in the Morrish Medal count. He represented Vic Metro at the U18 Championships and averaged 29 disposals per game while kicking 15 goals over 13 TAC Cup matches to finish ahead of Brayden Fiorini and Michael Ercolano as club champion. Tyrone Leonardis (Coaches Award), Kieran Malone (Most Consistent Player) and Matt Perry (Most Improved Player) were other award winners on the night.

Oakleigh Chargers: Kade Answerth
Answerth made it back-to-back James Honey Medal successes after a stellar season that culminated in the TAC Medal for best-on-ground in Oakleigh’s Grand Final victory. The 19-year-old Caulfield Grammarian shared the award with Alex Urban in 2014 but overtook Tom Phillips at the end of a close count to claim the 2015 version outright. He averaged 24 disposals and six tackles per game across 14 matches as a bullocking inside midfielder, also representing Vic Metro at the U18 Championships. The Coaches Award went to Jack Roughsedge, the Best Finals Player award to Lachlan Byrne-Jones and the Best First-Year Player award to Dion Johnstone.

Sandringham Dragons: Tom Wilkinson
Wilkinson returned to Sandringham as a 19-year-old in 2015 after playing 20 games and kicking 28 goals in the previous two seasons. The Frankston YCWFC junior made the most of his final year in the TAC Cup, averaging 25 disposals per game and kicking nine goals over 13 matches to take out the club’s Best and Fairest Award. He finished ahead of Goy Lok – named the Most Improved Player on the night – in second and Robert Iudica and Jack Wallace in equal-third. Wilkinson was also named the Most Consistent Player, while Andrew McGrath was given the Best First-Year Player award.

Western Jets: Lachlan Knight
Knight, a defender/midfielder, shone in a disappointing year for the Jets, taking home the Barry Round Medal after averaging 23 disposals and almost five tackles per game across 14 matches. The 19-year-old Yarraville/Seddon junior edged out fellow top-age player Mitch Norton to claim the award after missing all of 2014 through injury. Other award winners on the night included Liam Carter (Coaches Award), Wilson Berry (Most Consistent Player) and Oscar Junker (Best First-Year Player).