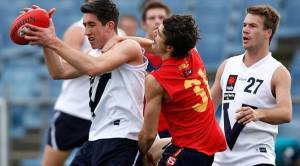 AFL Victoria’s Country and Metro teams will face a new opponent in the 2016 NAB AFL U18 Championships.

Adding to the annual rivalry against South Australia and Western Australia, the two Victoria teams will now face the Allies, comprising of players from NSW/ACT, Queensland, Tasmania and the Northern Territory.

The Allies Squad will be selected following the completion of Division 2 of the NAB AFL Under 18 Championships in May, joining the Division 1 teams for the June 4 start.

The five teams will play four matches each during June and July in 2016, playing each team once, a change from recent years where the Division 1 sides played each other twice.

Playing at AFL venues across Australia, including Simonds Stadium and Etihad Stadium in Victoria, Division 1 of the NAB AFL Under 18 Championships will now showcase Australia’s best talent and allow players from every corner of the country a chance to go head-to-head and press their claims for selection in the NAB AFL Draft.

In addition to the U18 Championship changes, the very best draft eligible players will play in a Toyota AFL Grand Final Day curtain raiser at the MCG in the NAB AFL All Stars Match.

The two competing sides will selected from all five teams that compete in Division 1 of the Championships.

The best U17 talent will also have a chance to impress in Grand Final week with a Future Stars Match likely to be held on Friday, September 30.

This match will also present AFL clubs with an opportunity to examine the next crop of AFL stars ahead of the 2016 NAB AFL Trade Period in which future draft selections can be exchanged.

“The Allies have been part of the NAB AFL All Stars Match for the past two years and are now ready to compete against the might of South Australia, Western Australia and Victoria,” he said.

Vic Country is fixtured to open its 2016 U18 Championship campaign against WA on June 5 in Perth, before facing Vic Metro June 12, SA June 24 and completing the Championship against the Allies on June 29.

Vic Metro will have a bye in Round 1 before its campaign against Vic Country June 12, followed by SA June 18, the Allies June 24 and WA June 29.