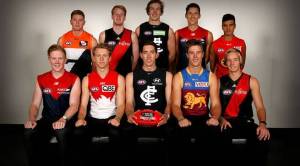 It was a highly successful night for AFL Victoria’s TAC Cup competition, with 36 of the 70 draftees selected from the premier U18 league.

Carlton confirmed what the football had long suspected by announcing Dandenong Stingrays defender Jacob Weitering as the no.1 selection in the 2015 NAB AFL draft.

Just a day after celebrating his 18th birthday, 195cm Weitering joined a Blues list set to be built by youth under new coach Brendon Bolton. His trademark assured intercept play and resulting drive from defensive 50 should make him a cornerstone of Carlton’s back line for years to come.

But Weitering isn’t just a brilliant player. As a person he’s mature, reliable and has demonstrated his quality as a leader this season by captaining Vic Country through an undefeated U18 Championships campaign. In future, his new club might be able to build more than just their defence around him.

The draft positioning of Murray Bushrangers key forward Josh Schache was another seemingly foregone conclusion on the night, and indeed, the 18-year-old was picked by the Brisbane Lions at no.2 as suspected.

199cm Schache burst onto the national scene this season by winning the Larke Medal as the best player in Division 1 of the U18 Championships after booting a record-breaking goal haul across six games for Vic Country.

He has the potential to be a much-needed centrepiece of Brisbane’s young developing forward line alongside the likes of fellow talls Josh Walker, Dan McStay and Michael Close.

A teammate of Schache’s at the Bushrangers, Clayton Oliver, completed a meteoric rise from missing out on selection for Vic Country at the U18 Championships to being picked at no.4 by Melbourne.

The 18-year-old goalkicking midfielder enjoyed a barnstorming run of form at the end of the TAC Cup season to take out the Morrish Medal for the best and fairest player in the competition and elevate himself into first-round contention.

The selection of Oliver continues the recent trend of Melbourne taking big-bodied inside midfielders with its early picks, following Jack Viney in 2012, and Christian Petracca and Angus Brayshaw last year.

Dashing Geelong Falcons midfielder Darcy Parish will add pace to Essendon’s on-ball brigade after being selected by the Bombers with pick no.5.

The 18-year-old has been on the radar of AFL clubs for a while after earning All Australian selection as a bottom-age player in 2014 and backed that up with quality performances for Vic Country at this year’s U18 Championships.

Alongside Weitering and Schache, North Ballarat Rebels midfielder Jacob Hopper was the other prospect who would’ve been reasonably sure of his AFL destination ahead of the draft.

The 18-year-old grew up in the Riverina area of New South Wales and was part of the GWS Academy while he studied in Ballarat and represented the Rebels. Holding the right to match any offer that came for him, the Giants secured Hopper with pick no.7 after Gold Coast made a bid with its first pick.

Hopper has the physique and game style to quickly make an impact at the elite level and will join young stars such as Callan Ward, Dylan Shiel, Stephen Coniglio, Toby Greene and Lachie Whitfield as part of an imposing GWS midfield.

The 196cm 18-year-old suffered an ankle stress fracture in May that caused him to miss the U18 Championships and the remainder of the TAC Cup season, but had shown enough for the Demons to see him as a future forward line pillar alongside Rising Star winner Jesse Hogan.

After taking Weitering with the no.1 pick, Carlton completed a set of first-round bookends by selecting Gippsland Power key forward Harry McKay with pick no.10.

Still only 17 years old, 200cm McKay made a name for himself at the U18 Championships with some bullocking performances next to Schache in the Vic Country forward line.

The Blues then snared another tall for their relatively thin key-position stocks two picks later by taking Geelong Falcons forward Charlie Curnow at no.12.

Having recovered from a mid-year knee injury that forced him to miss the U18 Championships, the 191cm 18-year-old at times showed his potential to develop into a big-bodied midfielder in the latter part of the season and will be delighted to join his brother Ed at Ikon Park.

After welcoming Chris Yarran during the recent AFL Trade Period, Richmond added some further spark to their list by selecting North Ballarat Rebels small forward/midfielder Daniel Rioli with pick no.15.

The 18-year-old Northern Territory native was the star performer at last month’s AFL Draft Combine and also demonstrated his electrifying qualities with NT in Division 2 of the U18 Championships.

Adelaide threw the first major curveball of the night by opting for Geelong Falcons defender Tom Doedee at pick no.17.

Despite being a highly rated character within the Falcons and Vic Country, the 18-year-old wasn’t expected to be selected until much later in proceedings, but will now join Daniel Talia, Brodie Smith and Jake Lever as Crows backmen drafted as first-round picks.

St Kilda snapped up one of the most accomplished TAC Cup players in 2015 by picking Northern Knights captain Jade Gresham at no.18.

The former Kickstart 177cm 18-year-old was one of the most prolific midfielders in the competition, winning the TAC Cup Coaches Award and finishing second behind Oliver in the Morrish Medal. He also starred for Vic Metro at the U18 Championships, earning the team’s best and fairest award.

Gresham’s teammate at the Knights – and one of the very few TAC Cup midfielders even more prolific than him in terms of disposals per game – Brayden Fiorini, was taken by Gold Coast shortly after his captain at pick no.20.

Closing out the first round, Gippsland Power key-position player Ben McKay joined his twin brother Harry on an AFL list after being selected at pick no.21 by North Melbourne, while slick Oakleigh Chargers midfielder David Cuningham was Carlton’s fourth selection in the first round at pick no.23.

Attention will now turn to the preseason and rookie drafts this Friday.