Academy channels the champs on US camp 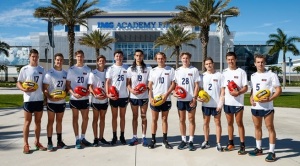 Emulating the trademark of the AFL’s reigning triple premiers was the name of the game at the NAB AFL Academy’s recent US training camp.

The Level Two Academy squad – 35 of the nation’s best underage players eligible for the 2016 AFL Draft – were taught to kick like the best.

Hawthorn, under the guidance of four-time premiership coach Alastair Clarkson, has conquered the football world by foot. The Hawks are an army of precision boots that carves its way through opposition defences towards goal via pinpoint passing.

What better example to set for the latest batch of elite underage talent aspiring to crack the big league?

13 TAC Cup players attended the January 11-26 camp that involved a stay at the high-performance IMG Academy in Bradenton, Florida (see list of players below).

“We had a massive focus on that,” Poholke said.

“The camp was split up into conditioning days – pretty much getting you fit – and then a day of ball work. The ball work days were definitely the most enjoyable and where I felt most comfortable.

“‘Sando’ went through a few tactics – his old midfield structures from Adelaide – trying to get us used to AFL structures, but his main point was to work on our short kicking – quick turnaround (off the mark) and punch it in (to a teammate).

“The back end of our training – the last half an hour or so – was mostly focused on getting our short kicking technique right.”

Sandringham Dragons 18-year-old Will Setterfield said the focus on kicking would help him improve one of the weaker aspects of his game.

“I wouldn’t say it’s one of my strengths,” Setterfield said of his kicking.

“The coaches put a bit of pressure on us to get it right. It was a bit windy on a few days so we just had to adapt to that.

“‘Sando’ gave us a few techniques to practice so hopefully the kicking’s improving as we do them at home now.”

Setterfield is known for his endurance running ability but even he found the professional training environment to be “really full-on”.

“The legs were jelly after the first day because we had a conditioning day and were still a bit jetlagged from the flight.

“The demands of training every day and backing it up did take a bit (of effort), but we sort of got used to it after about the fourth or fifth day and got into a bit of a routine.”

The GWS Academy member relished simply being able to train after missing the 2015 TAC Cup season with a bone lesion in his knee that limited his ability to do aerobic work.

Poholke, meanwhile, realised his current endurance level was “not up to scratch”. He said training to such a high level with some of the country’s best underage players was a surreal experience.

“It hasn’t really sunk in yet that I’m a part of that group,” Poholke said.

“The intensity level of training just lifts you as an individual, so you kind of rise to their standards. Then it’s just up to you whether you want to keep to them or not.”

Following the camp in Bradenton, some well-earned downtime was spent on the opposite side of the States in Los Angeles, California before returning home. It was a chance for the boys to get to know each other better before embarking on a football year that will likely include playing with and against each other at the U18 Championships and perhaps graduating to the AFL together come draft time.

More immediately though, the Academy’s next gathering will be a camp in Melbourne from March 24 to April 3 including a game against the Werribee VFL team at the MCG on the weekend of April 2-3. A match against the Geelong VFL team at Simonds Stadium will follow on Saturday April 9.

They will be the next steps in preparing the boys to pinpoint their way to the top of the AFL tree.

* Photo: Victorian members of the AFL Academy in front of the IMG Academy in Bradenton, Florida