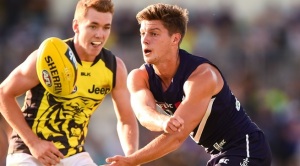 A handful of TAC Cup players selected in the 2015 AFL and Rookie Drafts made debuts for their new clubs in the weekend’s NAB Challenge matches, with several playing starring roles.

Hard-running Ryan Clarke (pick no.31, AFL Draft) starred for North Melbourne in the Kangaroos’ 44-point victory over St Kilda in Wangaratta on Saturday. The former Eastern Ranges midfielder helped himself to 13 disposals, six inside-50s and two goal assists in 70 per cent game time.

They were arguably out-shone in the same game by Gold Coast’s Darcy MacPherson (pick no.21, Rookie Draft) though. The ex-Northern Knights small forward attacked contests with vigour, recording 12 disposals, eight contested possessions, an impressive 10 tackles and a goal.

Classy half back Tom Cole (pick no.36, AFL Draft) appeared for West Coast in the Eagles’ 100-point loss to Adelaide at Unley Oval, Adelaide on Sunday. The former Bendigo Pioneers playmaker had five disposals in 76 per cent game time.