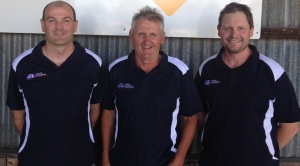 The 2016 Vic Country Academy coaches have been named, with new U16 coach Matt Battistello joining incumbent U18 coach Paul Henriksen.

Battistello replaces outgoing U16 Vic Country mentor Leon Higgins, who will coach the Murray Bushrangers in the TAC Cup this year.

Higgins and Henriksen guided their teams to undefeated title-winning campaigns at the AFL U16 and U18 Championships respectively in 2015.

Battistello was an U18 assistant coach to Henriksen for the last two years and an assistant to two-time TAC Cup Coach of the Year David Loader at the North Ballarat Rebels since 2012.

Before that, Battistello coached Wendouree FC to a premiership in the Ballarat Football League during a stint in charge of the club from 2008-11. He commenced his coaching career as an assistant to former AFL senior coach John Northey at the Ballarat FC from 2003-07.

“Matt’s development over the past years has been rewarded and we are looking forward to him joining the coaching ranks in our Academy,” Harris said.

“Matt and Paul Henriksen are talented young coaches on the rise.”

23 players from country TAC Cup clubs were selected in the 2015 AFL Draft, while a further four were taken in last year’s Rookie Draft.

Four of the top 10 Draft picks were integral to Vic Country’s success in the U18 Championships – Jacob Weitering (pick no.1 to Carlton), Josh Schache (pick no.2 to the Brisbane Lions), Darcy Parish (pick no.5 to Essendon) and Harry McKay (pick no.10 to Carlton). Many of the victorious U18 team had come through the Vic Country Academy as members of a successful U16 Championships campaign in 2013.

Battistello’s appointment means both the Vic Country coaches and Talent Manager (Harris) have their origins in south-west Victoria.