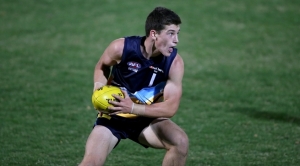 The Pioneers are feeling positive in 2016, with several exciting youngsters looking to help lift the club up the TAC Cup ladder.

The Pioneers finished last behind the Western Jets on percentage in 2015. Their two wins came against the NSW/ACT Rams in Round 10 and the Jets in Round 14 but one of their best performances was to finish within three points of eventual grand finalists the Eastern Ranges in Round 6.

After the club produced two draftees last year, Talent Manager Stephen Sharp said he expected captain Joseph Atley and vice-captain Kobe Mutch to be firmly in the AFL Draft frame come November. Tough midfielder Atley – the brother of North Melbourne’s Shaun – finished third in the 2015 best and fairest award as a 17-year-old, while Mutch is a midfielder/forward and member of both the AFL and GWS Academies.

Sharp is also looking forward to seeing key-position prospect Cooper Jones and indigenous player Kayle Kirby take the field for Bendigo in 2016. “He’s an excitement machine,” Sharp said of Kirby. “He’s got all the attributes you’d want to go and pay money to see.”

The club will take four 19-year-olds into the season including Jamieson Sheahan, a Bendigo native who played 11 games for the Geelong Falcons last year. Sharp said Sheahan – also the club’s Football Operations Manager – had “outstanding leadership skills”. Ruckman Zac Norris and Jack Exell – the son of former Geelong and Fitzroy player Gavin Exell – are other over-age players along with Isaac Miller, who returns for a second season with the Pioneers. “He was probably one of the last players picked on our list last year but became one of our top six or eight players,” Sharp said of Miller’s rapid development.

Positivity is the theme of 2016 at Bendigo. Senior coach Brett Henderson has been surrounded with a new-look group of assistants comprising several experienced local coaches who have had “a real positive influence since coming on board” according to Sharp.

The Pioneers open their season on Saturday March 26 against the Murray Bushrangers at Deakin Reserve.