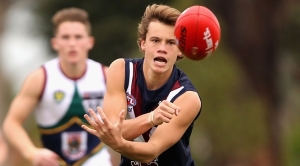 After a lean 2015 season, the Dragons boast a group packed with top-end talent and hold high hopes for a successful 2016.

The Dragons missed last year’s finals on percentage behind the eighth-placed Calder Cannons. They showed they could mix it with the best though, knocking off eventual grand finalists the Oakleigh Chargers by 19 points in Round 4 and the Eastern Ranges by five points in Round 18.

Talent Manager Ryan O’Connor predicted a rise up the ladder in 2016 though, with a group hungry for success after a difficult 2015 season. “The best thing for us is – after what we would term an uncompetitive year – we look to have a really deep and stronger list,” O’Connor said. “It was pretty lean last year and I think that’s whetted the group’s appetite.”

The club boasts a handful of players in draft contention this year, led by tall midfield prospects Jack Scrimshaw and Will Setterfield. Scrimshaw is currently trying to overcome a hot spot in his foot, but Setterfield is healthy again after an injury-interrupted bottom-age season and, according to O’Connor, is “improving every time we see him at training”.

Goy Lok is the biggest name back at the club as an over-age player. “He was in draft contention last year but I think clubs wanted him to expand his game,” O’Connor said of Lok. “They saw he was probably a bit too inside and he needed to get outside and run and carry a bit.” Tom Cameron, Darcy James and Hugh Johnson join Lok at the club as 19-year-olds for 2016.

The Dragons open their season on Saturday March 26 against the Northern Knights at Ikon Park.

* Photo: Corey Lyons fires off a handball for the Sandringham Dragons in 2015