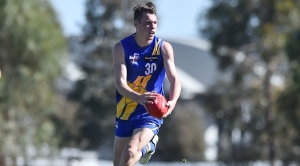 The Jets are expecting a jump back up the ladder in 2016, led by a group of talented players that received plenty of opportunity last year.

The Jets missed the finals last year after September appearances in 2013 and 2014. Their two wins came against the Bendigo Pioneers by 21 points in Round 7 and the finals-bound Calder Cannons by nine points in the final home-and-away round.

Talent Manager Shane Sexton expects a jump up the ladder from Western’s 2016 group though. He said while the list is usually split evenly between top-age and bottom-age players, the club has about 75 per cent top-age players this year. “It’s the first time that’s ever happened out here,” Sexton said. “This group has always promised to be pretty handy. I think it’s not an unfair statement to say there’s a fair bit of interest in them.”

Much interest will centre on three Penleigh and Essendon Grammar School boys, Daniel Venables, Harrison Bult and Brock McGregor. Venables is a powerful ball-winner who has now chosen football as his top priority over cricket, Bult is a mobile tall defender who Sexton says has matured rapidly over the off-season and McGregor is a power forward currently working to overcome a back injury. Sexton also said co-captain Wilson Berry will be one to watch, along with currently injured pair Judah Dundon and Oscar Junker (also a co-captain).

According to Sexton, the pick of the club’s over-age players is pacy ball-carrier Daniel Foley. “Daniel played some good footy last year but for whatever reason didn’t really get it together,” Sexton said. “This time around he’s acquitted himself well in the practice matches, winning his own ball and improving his endurance.” Foley will be joined by developing ruckman Josh Webb and injury-prone trio Jackson Menadue, Jayden Murdoch and Tyler Vujanic as Jets 19-year-olds for 2016.

There’ll be some returnees in Western’s coaches box this year too. The club’s ex-U15 coach Troy Scoble, former long-time U16 coach Ray Stevens and Mark Greenshields will all take up assistant coaching positions.

The Jets open their season on Saturday March 26 against the Oakleigh Chargers at Ikon Park.

* Photo: Daniel Venables in action for the Western Jets in 2015