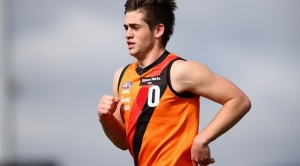 In the lead-up to Round 1 of the TAC Cup competition for 2016, Daniel Short previews each of the games that will kick off the season:

It has been a demanding preseason for the Geelong Falcons but the group is raring to go for its Round 1 opener with the North Ballarat Rebels.

Coach Andrew Allthorpe said the club had put a high emphasis on improving the fitness base of the promising youngsters. And while much of the attention last year was placed on the likes of the highly touted Darcy Parish and Charlie Curnow – Allthorpe expected a much more even group in 2016.

“We know the boys have done a power of work ... we put a bit more effort into the running side of it, I think we’ve got a better running group that can cover the ground better as a squad.” Allthorpe said.

“It’s been an interesting preseason with a lot of guys standing up and really impressing.

“Every night there’s someone different popping up, they’ve just been a really good group to work with.

“I think we’ve got a much more even squad with more depth this year ... whereas say last year you had Darcy (Parish), Rhys (Mathieson), Charlie (Curnow) who are really eye-catching in what they do.

“This year there’s just been different contributors across the board.”

At the Rebels, Gerard FitzGerald returns to the club as head coach after 17 years coaching at VFL level, that included a two-year stint at the Rebels in 2005-06,

FitzGerald was excited to begin the season and hoped his experience at VFL level and extensive time around the game would help him fast-track and develop the squad.

“It’s certainly my ambition to become a good role model and a good influence on these boys,” FitzGerald said.

“My main focus has been trying to just provide as many opportunities for as wider group of boys as I could to help provide professional development ... I get to use my experience across the board.

“It’s pleasing now to actually get the squad together and begin to work on them ... I’ve got a season to get these boys playing well.

“My major excitement now is we’ve worked through the selection trials and we’re about to play a game and then the group of 2016 can begin to define itself.”

The 2015 grand finalists kick off season 2016 Thursday night against the Calder Cannons. The Ranges will be looking to start their season in a positive fashion and will be buoyed by the fact last year’s Grand Final team had nine 17 year-olds and three 16 year-olds – which should hold it in good stead for 2016. For the Cannons, second-year coach Andrew Johnston will welcome some AFL experience into the clubs coaching ranks with Lance Whitnall and Scott West coming on board in a boost for the club.

The Jets will be looking to get its season off to a winning start as it begins a year it hopes to return to September action. But it will be hard-pressed against the reigning premiers – Oakleigh Chargers – who continue to have a wealth of talent amongst its squad.

After producing the number 2 and 4 picks in last year’s National Draft, the Murray Bushrangers are no stranger to rich talent and Talent Manager Lee Fraser believes the side’s strength this season will be an evenness across the ground. While the Pioneers welcome some new faces to the coaching group and will be hoping for a better season than its 12th placing in 2015.

Gippsland Power produced five draftees last year and another one already catching the eye of clubs is dynamic forward Ben Ainsworth. The Stingrays boast quality all over the ground, as was the case last year with a plethora of draftees heralding from the club. Talent Manager Mark Wheeler believes there could be even more depth at the club in 2016.

The Northern Knights will be eager to draw on the momentum in ended last year with, after a largely disappointing year. It will kick season 2016 off against the Dragons. Both clubs have spruiked plenty of talent within their squads and Sandringham will be looking to build on its near-miss of finals last season.