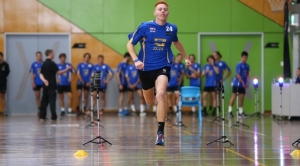 On Saturday March 12, over 550 TAC Cup players were put through their paces as part of the annual TAC Cup Fitness Testing Day.

AFL Victoria, with the assistance of Rookie Me, tested each of the players across four different stations – 20-metre sprint, agility test, beep test and vertical jumping (standing and running).

In the day’s most gruelling test, Gippsland Power bottom-age player Travis Bindley recorded the best beep test result with a 16.03. Just behind were Jake Bradley (Northern Knights) and Lachlan Huppatz (North Ballarat Rebels), who both ran a 16.02.