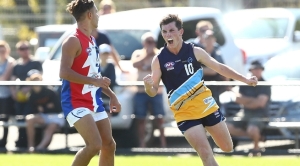 The Bendigo Pioneers put on a show for their home fans at Queen Elizabeth Oval last Saturday, kicking away from the Gippsland Power to triumph by 43 points.

In the first game of a triple-header in Bendigo for the Country TAC Cup teams, last year’s bottom-placed side showed there’s plenty of cause for optimism in 2016.

The Pioneers won only two matches in 2015 but have already logged half that tally this year. They also scored less than 50 points per game last season, but put 115 on the board against the Power. With scores level at half time, Bendigo demonstrated a new attacking dimension by putting the foot down in the second half and booting 11 goals to four.

In the following match at QEO, the Dandenong Stingrays claimed their second win of the season in a grinding affair against the North Ballarat Rebels.

The Stingrays won by 30 points but the conversion of North Ballarat’s missed opportunities in front of goal may have made a big difference to the result. The Rebels were within striking distance at half time just 11 points in arrears, but could only manage five behinds in the third term while Dandenong kicked 3.2.

The Murray Bushrangers continued their barnstorming start to the season by accounting for the Geelong Falcons to the tune of 69 points in the last leg of the QEO triple-header.

After a big win against the Pioneers in Round 1, the Bushrangers promptly blew the Falcons away with 5.3 to two behinds in the first quarter and finding themselves 56 points in front by the main break. Murray’s scoring potency has been on show in 2016, having kicked 19 goals in each of its first two outings.

On Sunday at Ikon Park, the Oakleigh Chargers weathered a late comeback from a spirited Northern Knights outfit to record their first victory of the season by four points.

The Chargers had held their opponents at bay for much of the first three quarters and extended their lead to 25 points early in the final term before the Knights lifted. Some freakish Northern goals from tight angles would’ve had Oakleigh feeling nervous before time ran out.

Also at Ikon Park on Sunday, the Eastern Ranges notched their second win with a comprehensive second-half performance against the Western Jets. Having kicked 14 goals to six after half time to defeat Calder in Round 1, the Ranges piled on 12 goals to two in the second half to bring the Jets down to earth following their impressive first-round triumph over Oakleigh.

To conclude Round 2, the Sandringham Dragons joined Dandenong, Murray and Eastern as an undefeated team by holding off the Calder Cannons at Rams Arena. The Cannons rallied from 41 points down at three-quarter time but left their push too late, only getting to within 12 points at the final siren.