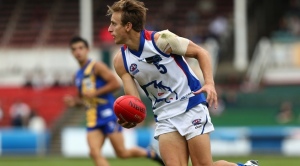 The Sandringham Dragons have wasted no time adopting the coach’s game style, claiming victory in its two opening matches.

It will take on the Oakleigh Charges in this weekend’s stand alone match. Dragons coach Jeremy Barnard praised some of the group’s most impressive youngsters in the early stages of the season – vice captain Corey Lyons and Oliver Florent.

“(It’s) pleasing for the way the players have tried to implement our game plan. I think they’ve been really diligent and tried really hard with all the facets of the game plan,” Barnard said.

“He’s (Lyons) been fantastic for us. (He) really understands his role in the team, but more importantly has really improved some parts of his game that we’ve tried to work on.

“He’s certainly taking his game to another level, but there’s a few more levels to go. But his individual development (is) tracking the right way.

“Great start to the year for Ollie (Florent).

“(He’s) got really good game sense, understands the game and certainly has a few tricks up his sleeve.”

Oakleigh Chargers boast considerable talent as well, but it has been one name that has drawn all the attention - Josh Daicos.

Chargers coach Michael Stinear said despite the extra attention on Daicos, he had full faith the youngster would stay level-headed as his football story develops.

While Saturdays focus from a team perspective was on playing consistent football.

“We’re probably a little rusty at the moment ... we’ve learnt some valuable lessons from the first two games,” Stinear said.

“(We’re) looking forward to seeing us play four quarters, hopefully it’s not too far away.

“He’s (Daicos) a really good kid, he’s not one to get ahead of himself.

“He’s still finding his feet at TAC level but one that continues to improve.

“As he adjusts to the level and tempo he’ll really start to take ahold of some games.”

Click the document below for the Sandringham Dragons and Oakleigh Chargers teams.