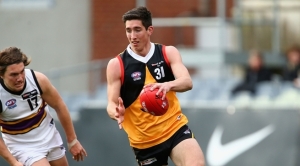 195cm Weitering, 18, has fitted in to Carlton’s back line seamlessly in three games since being selected by the Blues with pick no.1 in the 2015 NAB AFL Draft. He was one of Carlton’s best players in the club’s 54-point loss to Gold Coast, tallying 26 disposals at 81 per cent efficiency, nine marks (three contested), six one-percenters and five rebound-50s.

The Mt Martha junior captained the undefeated Vic Country team at last year’s AFL U18 Championships, earning selection in the 2015 U18 All Australian team. He was also selected at centre half back in the 2015 TAC Cup Team of the Year.

Weitering has become known for his ability to intercept opposition forward thrusts and calmly rebound from defence. Carlton coach Brendon Bolton paid tribute to those traits after Saturday night’s match.

“This (Rising Star nomination) is a great acknowledgement of Jacob’s impressive start to his AFL career,” Bolton said. “His composure, ability to take an intercept mark and decision-making are fantastic.

“He has come into the system wanting to absorb as much as possible and he has fully embraced what we are trying to implement as a club.”

“Jacob is only three games in, but there’s no doubt he will only continue to learn and develop. We know he has a bright future here at the Carlton Football Club.”

Weitering said he was excited to be a part of the club’s rebuild under Bolton.

“Being part of the draft crop including (fellow TAC Cup players) Harry McKay, Charlie Curnow, Jack Silvagni and David Cuningham, who are all coming through and are developing very quickly, is exciting.

Weitering is the third 2015 TAC Cup graduate to be nominated for the Rising Star this year after ex-Murray Bushranger Clayton Oliver in Round 1 and former Geelong Falcon Darcy Parish in Round 2.